​The Election of 2012 in Historical Perspective
​
Julian Zelizer
Professor of History and Public Affairs, Princeton University 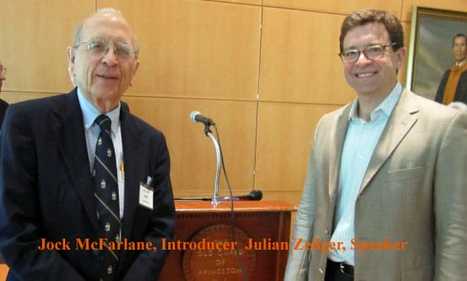 Minutes of the First Meeting of the 71st Year
President Ruth Miller called the first meeting of the Old Guard’s 71st year to order at 10:15am. 118 members were in attendance.

Minutes of the May 23 meeting were read by Joel Greenberg.

President Miller informed the membership that three had died during the summer: George Bishop, Win Pike, and Don Shaffer.

Jack Reilly announced that anyone wishing to propose a new member needed to file the paperwork by October 1 for the fall induction.

President Miller reminded the membership that attendance at meetings is expected, though the occasional miss is understood.

Jock McFarlane introduced the speaker, Julian E. Zelizer, professor of history and public affairs at the Woodrow Wilson School of Princeton University. Professor Zelizer received his BA from Brandeis University and his PhD from Johns Hopkins. He came to Princeton in 2007 from SUNY-Albany.  He is a frequent contributor to print and broadcast media and a leader of the resurgence in importance of Political History as a field of study, according to the Princeton University Press. His most recent book is titled “Governing America: The Revival of Political History.” His presentation to the Old Guard was entitled “The Election of 2012 in Historical Perspective.”

Professor Zelizer discussed three “big picture” situations that make the 2012 election interesting and unpredictable:
Regarding the “role of government,” Obama presents Romney only from the Bain side of his experience, but ignores the Governor of Massachusetts side, which was decidedly more “pro-government.”  And Romney presents Obama as an uber-big government liberal, though, Obama has not rolled back globalization. According to Professor Zelizer, both parties are actually in the middle of the spectrum.

He stated that big-government icon FDR was actually striving to create a stable environment for risk taking.  Truman and LBJ wanted MORE market opportunities for people; Carter was a de-regulator; Clinton ended “welfare as we know it.”

Among Republicans, Reagan left medicare and big agriculture alone; George H.W. Bush signed the Americans with Disabilities Act; Gingrich made deals with Clinton; George W. Bush “saved the markets” with TARP, created the Department of Homeland Security and initiated the Medicare Drug Benefit.  The Bush No Child Left Behind act violated local control of schools.
So the debate isn’t really about the size and scope of government, but about the priorities within the general scope that now exists.

The state of the Republican Party is “a brand name in trouble.”  In 1980 Carter was the “goat” President.   Now it’s GW Bush.   In 1980 Republicans were attacking the status quo.  Now they are but four years removed and find themselves having to defend the Bush record.
In 1980, the sunbelt was emerging and available to Republicans for the taking as Democrats became more “coastal.”  Today, Republicans have given up on minorities, allowing the Democrats to build a coalition of minorities, unionized government workers, and high income social liberals.
So where does that leave the race 60 days out?

Tight, very tight.  Look for demonizing ad wars in battleground states. Look for debate sound bites and physical moments to possibly be determinative.  He cited Nixon sweating, Reagan’s “there you go again” and “are you better off” moments, and Al Gore’s bizarre physical antics. He says Romney is “better than you think” at debating, having learned to tease out the weaknesses of opponents and making only one real mistake, the $10,000 bet, in the primary debates.  And look for the “ground game” to matter in the last 72 hours. Turnout of the base is where the pick of Paul Ryan will, or will not, be enough to generate Republican turnout necessary for victory.

Questions dealt with:
Voter supression…look for Florida 2000 all over again.

Could Republicans go out of business…not likely; these parties are INSTITUTIONS.  For a Whig moment you need a crisis to implode a party AND a ready alternative.  Perot and Nader and Ron Paul have been subsumed into the major parties.

Israel/Libya impact…could be similar to the Iranian hostage crisis.   Very dangerous for Obama’s position of being more experienced in foreign affairs.

Senate control critical...yes, but…the real power is that of the filibuster, so unless one party has 60 seats, they do not “control” the Senate.

Role of media endorsements…non-factors: newspapers are dying and broadcasters like Fox and MSNBC play to formed viewpoints.

Social Media and internet…Professor Zelizer is skeptical as to its current or future power.  Unlike party organizations, he sees internet alliances as transitory and un-enduring, but acknowledges the internet is “a work in progress.”  Knocking on doors still counts.  But we’ve seen the power of one YouTube video to inflame the world.

Summing up…between ad wars, three debates, and unpredictable foreign events, it’s going to be a nail-biter…for everybody.
​
I’m Owen Leach, and I approve this message.