ICAЯUS:
Making the Documentary that Exposed Russia's Cheating in Sports 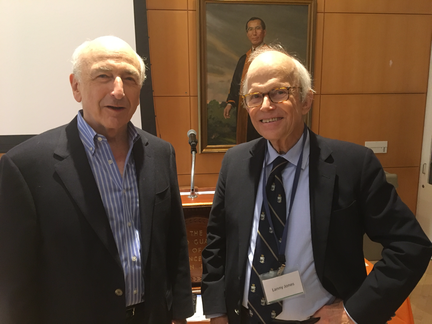 Minutes of the First Meeting of the 77th Year

President Coale made several announcements. She thanked two former presidents, Owen Leach and Jock McFarlane for their help in preparing her for her new role. She also thanked Charlie Taggart for building a small platform for her diminutive self upon which to stand when conducting meetings. Members’ dues are due, although payments are ahead of the comparable date last year. Dues should be made payable to The Old Guard of Princeton and delivered to Treasurer Miquelon Weyeneth. Updated membership thumb drives are available, in exchange for old thumb drives, from Greg Dobbs. Copies of the Fall 2018 Program were made available at the meeting. And finally, she announced the death of several Old Guard members: Jerry Freedman, Past Presidents James Walsh and Jonas Bingeman, Robert Gittleman, William Murdoch, and Charles Ufford.

In 1945, George Orwell wrote, “At the international level, sports is … warfare. …[N]ations … work themselves into furies over these … contests, and seriously believe … that running, jumping and kicking a ball are tests of national virtue.”

There are idealists, who view international sport as an example of purity, virtue and pseudo-religious pageantry, and pragmatists, who realize it is an example of profound greed in a battle for money and political power.

Stier doubted his talk would please the idealists.

The Olympics were abolished in 395 AD because of doping. In those days, magic mushrooms, alcohol, and bull’s testicles were the drugs of choice.

There have been frequent attempts to clean up international sports over the years. A Byzantine structure, including the International and National Olympic Committees, governments, and 170 sports Federations complicated the task. With potential revenue loss, there was a strong disincentive to expose corruption. Rules to monitor substance abuse were implemented, but not enforced. The infractions and attempts to quell them continued: at the Court of Arbitration for Sports; WADA, the World Anti-Doping Agency, with 34 laboratories; and WADA’s complex process for testing endorsed by 174 governments.

With the conviction of Lance Armstrong, there was confidence in 2013 that the problem had finally been brought under control.

In 2012, amateur bicycle racer, Bryan Fogel, wondered about Armstrong’s ability to avoid detection. He set out to make a documentary about the weaknesses in doping enforcement. He would film himself doing two races, one clean and one doped and undetected. He sought information about doping from the U.S. anti-doping lab, but communication was suddenly aborted. He then found Dr. Grigory Rodchenkov, head of the Moscow anti-doping lab and interviewed him.

As the film was being made, Julia Stepanova, a Russian distance runner, was caught doping and was barred from competition, all while her husband was an anti-doping technician. Subsequently, after many unanswered inquiries to WADA, a German TV station released a documentary showing the extent to which Russian athletes were doped.

WADA, embarrassed by the film, appointed an independent commission to investigate. The commission found widespread Russian doping, bribing, and sample destruction, all under the supervision of Grigory Rodchenkov.

Rodchenkov was forced to resign. Shortly thereafter, he re-established contact with Bryan Fogel. Frightened that he would be the fall guy and likely be killed, he flew to Los Angeles before the Russians realized he was gone. He was right. Subsequently two colleagues, with substantially the same knowledge, were found dead.

In a New York Times interview, Rodchenkov revealed the extent and complexity of fraud in his lab and how far Vladimir Putin himself had been willing to go to win. Through various channels, Rodchenkov’s testimony was corroborated. He is now in a witness protection program.

All of this was captured on film, in real time, as it was unfolding. And Icaruswon an Academy Award.

Today, international sports continue to be warfare. There are power struggles between IOC (International Olympic Committee) and WADA factions. There is an attempt to discredit both Rodchenkov and the work of the WADA Commission. There are two arbitration cases before the Court of Arbitration for Sport.

NOTE: Subsequent to the meeting, Mr. Stier mentioned that he regretted not having enough time for Q&A and encouraged anyone who had questions to contact him via email at ehstier@aol.com.