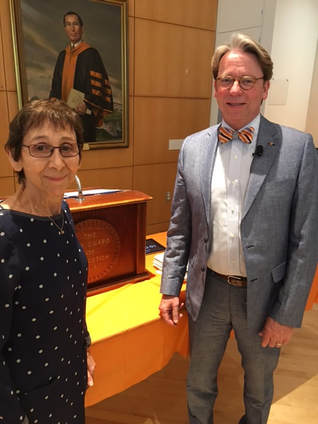 Minutes of the First Meeting of the 76th Year

James Steward joined the Princeton University Art Museum as its director in April 2009. He is a lecturer with the rank of professor in the department of art and archaeology and is a faculty fellow of Rockefeller College. He holds his B.A. from the University of Virginia and a doctorate in the history of art from Trinity College, Oxford University.

With a statue of Robert E. Lee in Charlottesville, Va., on the screen, Dr. Steward (or James, as he prefers) began by indicating that the time in which we live cannot be described only as the digital age but also as an age in which we are moving beyond “things” – objects as carriers of meaning. And that the human world, driven and transformed by technology, has established a virtual environment that is constructed and developed through the processing, storing and transmission of information with digitalized data.

James described several objects and artists that demonstrate this phenomenon. The first is the photographer Sally Mann.

A second photographer, less well known than Mann, is Ken Merfeld, who also works with a technique attributed to Mann. Merfeld indicated that by choosing this technique, he has also chosen to “slow down” and work in the original photographic technique of applying chemistry by hand to glass and tin.

James commented that in this process, we see the idea that it is somehow more honest, more able to get to some core “truth” than its digital counterparts are able to do.
The last photographer James commented on was Richard Barnes, who said that he ultimately seeks to go beyond the nostalgia of recreating the look of images from another era as his aim is to explore a creative tension that addresses the artifice of the re-enactment in juxtaposition to the evidence of contemporary life that occurs within and at the periphery of the photographic frame.

James argues that that phenomenon derives from the same magic of analogue experience and physical objects even in today’s digitally dominated world.

Even in a marketplace that is increasingly dominated by online shopping, physically interacting with products remains relevant. Physical stores play an important role in experiencing products and remains at the heart of the shopping experience.

James also noted that there is a historical narrative that could be seen as supporting the “post thing” argument -- the story of modern art.

James described examples of works of four famous artists to reinforce this point: Cezanne, Picasso, Soutine and Expressionism and Pollock and Abstraction.

Finally, James concluded his remarks by commenting that Modern Art doesn’t abandon the “thing” but rather, asks us to consider ideas and concepts as “things,” all of them suitable as the subjects of art. They are particularly helpful in tackling important issues and complex histories. They leave us to better understand the making of history by making history more visible.

It is the shaping of visual literacy of offering public spaces in which individuals can come together to discover the best of the world’s cultural heritage and ultimately to discover themselves.

Some of the artists which James highlighted to illustrate this point were Clarence White, Michael Kenna, Frank Stella and Maya Lin.

James’s talk was followed by a robust Q&A session formed of the questions framed by our members and the comprehensive response to them by James.