Making the Supreme Court:
The Politics of Appointments 1930-2020 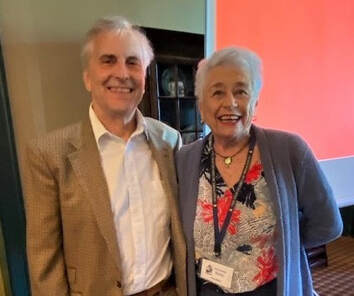 Charles Cameron with Introducer Ruth Miller
​Minutes of the Second Meeting of the 81st Year
President John Cotton convened the second meeting of the Old Guard’s 81st year at the Springdale Golf Club on September 14, 2022. He also led the invocation. Marue Walizer read the minutes of the previous meeting.

Ruth Miller introduced the speaker, Charles (Chuck) Cameron, Professor of Politics and Public Affairs at Princeton University, who summarized key findings from his forthcoming book co-authored with his Princeton University colleague, Jonathan Kastellec, Making the Supreme Court; The Politics of Appointments, 1930-2020. At the outset, Professor Cameron said that he takes quantitative approaches to political questions and would present a series of “charts of contentiousness” using various metrics to gauge changes in how Supreme Court nominees have been selected by presidents and won confirmation by the Senate over the last ninety years.

One measure of contentiousness is the percentage of yea votes for confirmation by the Senate. During the 1920s and 1930s, many nominees received ninety percent yea votes, but a serious downward trend began toward the end of the 1960s. This should not be construed to mean that all votes for confirmation in the past were not contentious, he suggested. Many court nominees during the 19th century were defeated or faced heavy opposition. Nor did the present polarization of votes for nomination begin with the rejection of Robert Bork in 1987. The trend toward greater contentiousness actually began in the middle of the 20th century. Today, every nomination and confirmation is a high-stakes, dragged out affair, with most nominees facing serious opposition in the Senate. Since 2000, only John Roberts received more than 75 percent of the yea votes in the Senate and, of the four nominees confirmed since 2017, none has received greater than 55 percent support.

What has been happening? Until relatively recently, the presidents and parties did not focus their selection of nominees based on policy agendas. More commonly, selections were based on patronage considerations. President Eisenhower chose Earl Warren because Warren helped him secure California’s delegates in the 1952 Republican primaries. Before 1972, there was no reference in party platforms to Supreme Court matters, except for a commerce issue in 1935 and the issues surrounding desegregation in 1954 after the court’s Brown v. Board of Education decision by the Warren court. However, since 1972 court-related issues began to appear in party platforms more and more, particularly in reference to abortion.

Before 1968, neither party proclaimed a litmus test for court nominees they would support. Since that year, such tests appear regularly in the platforms, particularly regarding abortion, same-sex marriage, law and order for the Republicans, and racial and gender diversity for Democrats. Overall, since 1968, the Republicans have been more focused on a political strategy regarding the judiciary than have the Democrats.

Lying behind much of this shift is the dramatic increase in organized interest groups represented in Washington. In the 1930s, there were an estimated 500. By 2010, about 15,000, most with judicial-related agendas. The number of interest groups filing amicus briefs on cases before the Supreme Court almost directly parallels the increase in the number of organized interest groups represented in the national capital. While there was not much mobilization of interest groups advocating for, or opposed to, individual court nominees before 1969, mobilization by these groups for and against nominees burgeoned since that year. Disturbingly, analysis of these groups finds many extremists on the left and right, but none, or few, moderates. They have helped push the parties toward increased political emphasis on the courts. This has translated into interest group influence on how presidents go about selecting nominees. For example, whereas the American Bar Association was once regularly used by presidents from both parties to help gauge the professional quality of nominees, the Republican Party now relies on the conservative Federalist Society instead.

Opposition to nominees is almost always concentrated in the party opposite to the president’s. Today, a nominee is lucky to get ten percent of votes from that party. In part, this is because senators are now more likely to align with partisan opinion, rather than overall opinion in their state, out of fear of a primary challenge and in response to party-line pressure. A review of all Supreme Court cases from 1866 up to the present finds that up until the 1970s there was very little relationship between party and voting on Supreme Court nominees. After that, the “judicial partisan sort” began. “Litmus tests” for nominees were incorporated in party platforms. As parties changed, so did the types of justices selected. Since 1968, Republican presidents have made 16 appointments; Democrats, only five. All six of the presently appointed Republican nominees were selected under a litmus test to reverse Roe v. Wade. The days of “surprise” justices, such as Earl Warren and David Souter, are over. Today, two grand coalitions of organized groups, activists, issue enthusiasts, and elected officials struggle over every court vacancy. Neither wants to quit.

One root cause for this turn of events was the party reforms of the 1960s that eliminated the machines and the smoke-filled room. In their place, we have ideological tribalism. Currently, we seem to be locked into life with a court that may not reflect majority views within the public, which are not nearly as polarized as our politics.

​During the question-and-answer period, Professor Cameron responded that while he felt there is something to be said for establishing term limits so that every president has a chance to nominate candidates for the court, such a reform is unlikely to happen. Enlarging the court or establishing term limits could well lead to tit-for-tat attempts at court reform with every party change in the presidency or in congressional control. An unhappy conclusion, but that is where we are, he lamented.