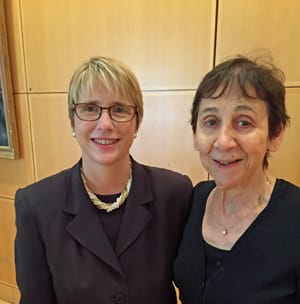 Caroline Harris, Speaker Marge D'Amico, Introducer
Minutes of the First Meeting of the 74th Year
The first meeting of the Old Guard of Princeton’s 74th year was called to order by President Owen Leach at 10:15 a.m. in the Convocation Room of the Friend Center on the Princeton campus. 131 were in the audience. Julia Coale led the invocation. Minutes of the May 20 meeting were read by John Kelsey. Arthur Eschenlauer announced that designation of Robert E. Cowen, Paul J. Hill and Henry J. Posner as emeritus members.

It was announced that an informal Emergency Medical Committee had been formed by Drs: Charles Rojer, Charles Clark, David Fulmer and David Adkin to be available to administer aid to any Old Guard member in distress.

The new publication, “The Old Guard of Princeton, New Jersey – Past and Present,” updated by Historian Diana Crane and co-editor David Fulmer, was presented.

Our speaker was Dr. Caroline Harris, Associate Director for Education of the Princeton University Art Museum. Her doctorate in 19th-Century French Art and Music is from the University of Virginia. Her previous museum experience was at the Philadelphia Museum of Art and the Phillips Collection in Washington, D.C.

Dr. Harris told the story, and the backstory, of Henry Pearlman, the son of Russian immigrants and the humble founder of the Eastern Cold Storage and Cork Insulation Company. A mere high school graduate who taught himself about art, Pearlman built one of the great collections of Impressionist and post-Impressionist drawing, painting and sculpture, with world-class concentrations in the works of Chaim Soutine and Paul Cezanne. His entire collection has been on loan to Princeton University Art Museum since 1976.

The speaker used images of art and family photographs to reveal much about an interesting man. Pearlman lived from 1895 to 1974; he married Rose Fried, of Lithuanian descent, in 1925. He began collecting in 1945, when he was walking down Madison Avenue and had what our speaker described as an “ah ha” moment.  He saw “View of Ceret” by Chaim Soutine, a recently deceased Parisian Expressionist painter.  It’s a crazy, wild painting but it captivated Pearlman, who bought the painting at auction and immediately began a deep intellectual interest in art, teaching himself at the Frick Library and other New York venues.

At the intersection of “shrewd” and “obsessed,” Pearlman developed a talent for seeing greatness in paintings that were relatively inexpensive but would become iconic works by his selected artists. For instance, he chose to buy a vertical self-portrait of Soutine, the vertical part uniquely benefiting his collection. The pursuit of quality was important, but so was the challenge of finding, authenticating and negotiating the ownership of increasingly rare masterpieces. Like many other wealthy New Yorkers we’ve come to know, he was into “the art of the deal.”

He and Rose traveled to Europe frequently to pursue Henry’s passion. On his very first trip he befriended the Austrian Expressionist painter Oskar Kokoschka, whom he met in Paris. Henry enjoyed involvement in the lives and careers of artists he favored. The speaker showed us a photograph of Henry, Rose, daughter Marge and Kokoschka taken when the artist was living with the Pearlmans in New York. Henry is smiling and king-of-the-roost; Rose…if “looks could kill.” Our speaker reported that Rose, in fact, hated Kokoschka.  But both Rose and Henry became fast friends with the Lithuanian-born sculptor Jacques Lipchitz and his wife.

Henry worked his friendship with Kokoschka to pursue connections to contemporaries of Soutine, which resulted in adding four works by Modigliani to the collection, including the iconic “Portrait of Jean Cocteau.”  The speaker told the story of how Modigliani had been invited to Picasso’s studio, where Modigliani and the artist Moise Kisling challenged one another to paint Cocteau. Modigliani’s was the better of the two, and he offered it to Cocteau, who refused it, which caused Modigliani to conclude that Cocteau was a “supercilious egomaniac.” Welcome to the world of art and artists.

One of the best stories is how Pearlman came to procure the great Van Gogh work “Tarascon Diligence” (which is a type of stagecoach).  That work was for decades a “missing Van Gogh.” It had moved between artists in Paris and the sculptor Medardo Rosso gave it to a Uruguayan student.  When it was about to be sold in Montevideo, Pearlman’s connections led to his being informed of the sale before the usual Van Gogh collectors; Pearlman bought it out from under the others and considered it his greatest collecting achievement, not so much because he loved the image, but because of how the “art of the deal” had played out.

We were shown a photograph of Pearlman’s office, which looked to me to be decorated in “early dentist,” except for the great art treasures on the walls. Van Gogh, Modigliani…it could have been a Princeton dorm room, except the art was real.

Pearlman’s collection came to Princeton in 1976, two years after Pearlman’s death. Museum director Peter Bunnell arranged a two-year loan with Rose Pearlman, head of the family foundation that owns the art. That loan, which took care of storage, conservation and exhibition-management, has been renewed every two years since then.  It’s thought that the scholarship that Princeton makes possible in its function as a teaching museum has helped cement what is an ever-stronger relationship.

The exhibition “Cezanne and the Modern” opened this past week and will probably be the last time for at least a decade that the 17 Cezanne watercolors, which have been carefully preserved by Princeton for almost 40 years, will be on public display. The exhibition ends Jan. 3, 2016.
The lecture ended with questions, including how, exactly, the Pearlman works traveled between Princeton, Oxford, Aix-en-Provence, Vancouver and Atlanta. The answer? Very carefully.