The Convergence of Research, Innovation, and Entrepreneurship at Princeton 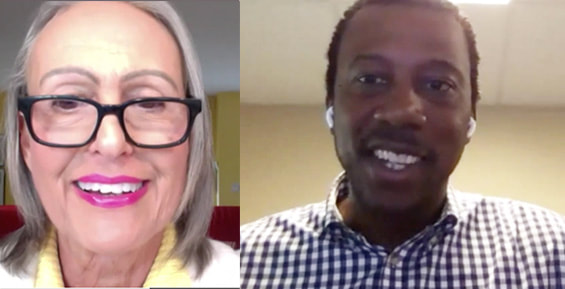 BF Graham, Introducer, and Rodney Priestley
Minutes of the Second Meeting of the 79th Year
President Stephen Schreiber presided over this virtual session attended by 110 members and guests. Three applicants for membership to the Old Guard were introduced: Mary Ellen Costello proposed by BF Graham; Lynn Johnston, proposed by Helena Bienstock; and Anne Florey, proposed by Marge D'Amico. In addition, guests were as follows: Katherine Kish (guest of Ralph Widner), Elizabeth Christopherson and former New Jersey Governor Tom Kean (guests of Lanny Jones); and Scott Magargee (guest of Al Kaemmerlen). Julia Coale read the minutes of the preceding meeting. President Schreiber announced that an election of new members will be held at the next meeting.
​
B.F. Graham introduced the speaker, Rodney Priestley, Professor of Chemical and Biological Engineering and Vice Dean for Innovation at Princeton University, who divided his talk into two parts: In the first, he described work in his laboratory that focuses upon research about and development of new materials created by compressing polymers down to nano levels. In the second, he sketched the ecosystem created at Princeton University to encourage and support such research, innovation, and entrepreneurship.

Professor Priestley commented that polymers pressured into nano compositions can produce the next generation of many materials, including better fuels, tires, etc., and cited his lab’s work on the development of a Solar Absorbent Gel to help meet one of the UN’s millennial sustainability goals as an example.

About 4.2 million people worldwide lack safely managed sanitation. Three billion lack basic hand-washing facilities at home. An estimated 2.2 billion have no access to safely managed drinking water. By 2030, water scarcity may displace 700 million people.  Around 443 million school days are lost each year because of water-related diseases. For all these reasons and more, his lab set out to develop an environmentally benign, low-energy, low cost modular technology that can be used readily in all sorts of situations to purify water.

Priestley and his students looked to the pufferfish as a model for a solution. The fish can make itself larger by swallowing air when danger approaches, then deflate once the threat passes. Correspondingly, his team developed a gel that expands quickly when exposed to sunlight quite quickly even in modest temperatures; then deflates when removed from the light, releasing the water absorbed during the puff-up and leaving the contaminates behind. He demonstrated a prototype module he and his students floated on Lake Carnegie which removed all the microbial life and inorganic debris from the water it absorbed then released. He said that he is now in talks with partners to help commercialize this technology and make it available worldwide.

He pointed out that this is precisely the kind of research spinoff that Princeton University seeks to encourage through a whole set of initiatives to spur innovation and entrepreneurship. The aim is to incentivize and support research that interacts with the world outside; that bears on economic and social needs; and that ties into and bolsters the New Jersey economy. He said that in the near future a collaboration will be announced to create a research and innovation hub in New Jersey by nine institutions, including Princeton.

He described the university’s strategy as aimed at sparking fundamental and applied research that will have a greater impact on society; support faculty, students, and alumni in their innovative and entrepreneurial ambitions; reinforce the regional and global innovation ambitions of the surrounding area and the state; and uplift the university’s teaching and research mission. The intent is to increase the number of patents submitted by faculty, students, and post docs; accelerate the number of start-up companies co-founded by faculty and students through licensing technology developed in their labs; and expand the number of licensing agreements between the university and established enterprises. He explained that the university’s policy is to sign on only to equity-free agreements and that licensing fees will range between two and five percent.

He pointed out that, while pursuing these goals, Princeton is somewhat unique in its intent to remain one of the world’s leading liberal arts universities, remarking that Google found, in recruiting its employees, that technical skills only ranked eighth in importance, compared to other requisite skills for success that are more likely to be acquired through a broad education of the kind Princeton provides.