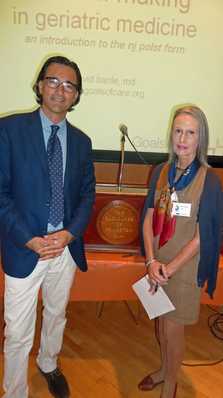 Speaker, David Barile, and Introducer, B F Graham
Minutes of the Second Meeting of the 72nd Year
The 2nd meeting of the 72nd year was called to order at 10:15AM by President Ruth Miller.
Joan Fleming led the invocation.

B.F. Graham introduced the speaker: David Barile, M.D. He is a physician, certified in Internal Medicine, Gerontology, and Hospice and Palliative Medicine. He is the founder and Director of “NJ Goals of Care”, a non-profit organization which tries to fight ageism and advocates matching patient goals with available therapies.

Dr. Barile began by defining the problem: world-wide aging, or, as he called it: Silver Tsunami!
By 2030 over 60% of humanity will be over 60. Presently, Canada, Western Europe and Australia have the highest percentage of seniors.

He showed a photo of Bismark, the originator, in the 1880’s, of social security, with benefits beginning upon reaching the age of 70. Life expectancy, at the time, was 50, a perfect “ponzi” scheme! He described Japan as facing the worst aging population in the world.

In an attempt to counter its aging population, Russia established September 12 as “Procreation Day!” And June 12 as “National Patriot Day” with an SUV awarded to the parents lucky enough to deliver on that day! Dr. Barile showed pictures of a “senior playground” in London’s Hyde Park. The World Health Organization has declared the US as unprepared for the rise in the aged, with particular need for home care.

He described the shift from palliation to the hunt for a ‘cure’, as technological progress resulted in deconstruction of the patient into body organs and the management of symptoms with hi-tech therapies.

Estimating prognosis: There is little teaching on this subject in school, mostly treatment plan rather than end of life care.

Ageism and stereotyping: Age is not enough to make a decision, too many other factors apply.

Written advanced directives: Few people have them. Most get their information from TV. There is a common public misconception that resuscitation results in 80% survival, when 5% is more accurate.

Not addressing “goals of care”:  The usual problem based treatment fails to determine the patient’s goals in his/her future. This will profoundly affect the choice of therapy, if any beyond comfort, support and pain management. The first question to ask patient is: “What are your hopes for the future?”

He described an elderly woman in need of dialysis but who refused until he asked her what her goal was, which was to reach her grandson’s Bar Mitzvah.  After explaining to her that this could only be done with dialysis, she agreed.  After the big day, she once again refused.  When asked why her other grandchildren did not provide the same incentive, she explained that the rest were being raised Christian.

He described the “Dartmouth Atlas” an organization evaluating the variable care in the States: for example: average # of doctor visits in the last 6 months of life: US: 29, Utah: 17, NJ: 41! Overall our state ranked 51st in quality/cost value, behind Washington, DC. He attributes this to lack of coordination from primary care to specialist/hospital and the focus on medical problem solving without attention to the goals of care.

POLST: practitioner orders for life-sustaining treatment. An actionable living will on a single page doctor’s order sheet. Signed into law in NJ, December 2012.

Dr Barile suggests filling one out at your doctor’s and keeping a copy in his/her office and one on your refrigerator door.

Questions: many related to the form, answers available on line at www.Goalsofcare.org.
Minutes of 9/11 meeting on “Advising Woodrow Wilson” were read by Julia Coale.