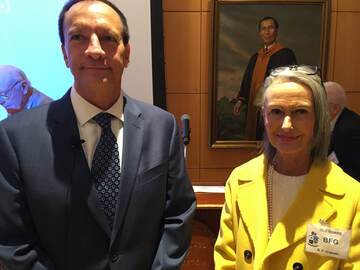 Minutes of the Second Meeting of the 78th Year

ANNOUNCEMENTS
President Coale reminded members still owing dues to pay their $50 to treasurer Miquelon Weyeneth by October 15, 2019. After that date, the assessment increases to $75.

Members who turned 85 on or before July 1, 2019 are emeritus and not required to pay dues. Members elected last May, 2019, will already have paid their current dues as part of their initiation fees.

A memorial service for Harvey Rothberg was announced for 3:00 p.m., Saturday, September 21, in the Princeton University Chapel.

A Program Committee meeting was announced for Wednesday, September 25, at 9:00 a.m.

PROGRAM
B.F. Graham introduced Andrew Voros, Senior Vice President at PrevenTive Conservation USA. He holds degrees in biology and psychology from Rutgers University and is a graduate of the U.S. Department of the Interior’s Federal Law Enforcement Training Centers. He has taught courses on environmental policy at Columbia University and held visiting research appointments at both Columbia and Rutgers.

Traditionally, Andrew Voros explained, conservation has meant cleaning off accumulated contamination while trying to do as little damage as possible to the underlying material. His company, by contrast, has found ways to apply nontoxic, catalytically active coatings to outdoor and indoor surfaces that ward off dirt and pollution before it can gain a toehold.

Buildings and monuments used to turn black from soot created by good old fossil fuels. Nowadays our outdoor structures get dirty, paradoxically, because the air has gotten cleaner. No sooner have building facades, gravestones, industrial roofs, and solar arrays been power washed than micro-fauna resume growing on them. Fungi, algae, lichen, and bacteria glom onto cleaned surfaces, trapping pollen, tire dust, and other inorganic dirt. These colonies grow a sticky, tenacious polymer coating to protect themselves. Such dense formations, called biofilms, are extremely hard to get rid of. The National Museum of the American Indian in Washington DC, only fourteen years old, has been pressure washed three times, yet was quickly black with fungus regrowing on its stone exterior. Because biofilms no longer have to compete with 1970s-style acid rain and smog, we see rampant staining by these fungi, algae, lichen and cyano-bacteria.

The biofilms themselves are destructive. They let tiny root structures into stone, mobilize the calcite out of marble and granite, and eventually lead to spalling, or flaking-off, of stone. But traditional efforts to blast the biofilms away with detergents and bleaches are worse, stripping off up to three-eighths of an inch of material. This creates structural, as well as aesthetic, degradation.

Enter titanium dioxide (TiO2) and the useful phenomenon of photo-catalytic oxidation. Blazing-white titanium dioxide is the ninth most common mineral on Earth. It’s used as pigment in paints, plastics and foodstuffs. It’s in sunblock, cosmetics, aspirin, and the filling of Oreo cookies.

Back in 1966, researchers wondered why titanium-based paint jobs stayed relatively clean. It turns out that even a small amount of ultraviolet light can mobilize electrons in the crystal structure of anatase titanium dioxide, a form of the compound, catalyzing a reaction that oxidizes water into hydrogen ions and hydroxide radicals. The hydroxyl radical is the most powerful, non-poisonous scrubbing agent in nature, stronger than straight 100% chlorine in oxidative power. These hydroxyl radicals oxidize all types of organic compounds, including formaldehyde and other volatiles, breaking them down to CO2 and water vapor. This benign reaction can produce a long-term self-cleaning benefit outdoors and eliminate unhealthy organic compounds from indoor air.

Catalytic solutions containing titanium dioxide have been developed for spraying onto newly cleaned surfaces, which used to begin degrading almost as soon as the power washers had packed up to leave. Mr. Voros’s company has contracts for applying these treatments to buildings on the Mall in Washington DC; to roofs and solar panels; and to surfaces inside offices, labs, and industrial workspaces where biofilms can accrete insalubrious volatiles that reduced air quality and made workers sick.
​
Keeping solar panels clean of accumulating gunk this way increases their energy capacity by 3% to 15%. Pollen and dirt simply slide off. Titanium dioxide also works as an anti-biofouling coating on undersea oceanographic probes and the hulls of yachts, replacing noxious tin- and copper-containing paints. In London, an entire street was treated, improving air quality throughout a large neighborhood almost overnight. It has even been used at whiskey distilleries for remediation of Baudoinia compniacensis fungus, which blackens buildings and vehicles as it cheerfully feeds on trace alcohol in the air.

Old Guard members hearing this talk wanted to know how to take advantage of this long-lasting, nontoxic technology for domestic concerns like blackened gutters and siding, encrusted roofs, dulled windows, dirty aquariums, and the sticky cooking-oil haze emanating from our kitchens. Mr. Voros invites us to e-mail him at asvoros@gmail.com for quotes on products and services available to consumers.