​Flocks and Fleets:
Collective Motion in Nature and Robotics 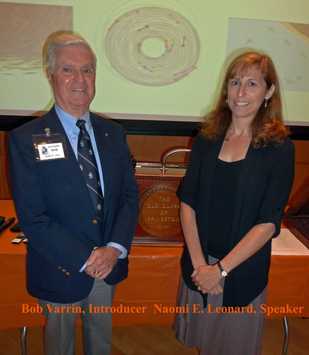 Owen Leach read the approved minutes of the Sept. 12 meeting. Bob Varrin then introduced our speaker Naomi Leonard, the Edwin S. Wiley Professor of the Department of Mechanical and Aerospace Engineering at Princeton University. Professor Leonard has a long list of credentials that include a MacArthur Genius Grant.

Her lecture was titled "Flocks and Fleets: Collective Motion in Nature and Robotics."
Professor Leonard started her talk by saying that the plan for the day consisted of three goals: If we are going to discuss collective motion of groups we need to define a group. Professor Leonard projected a slide that depicted a herd of zebras a flock of birds, a fighter plane squadron and a lineup of submersible gliders. Each picture is a group, either robotica or natural, and each individual in the group is mobile, it can get around, it can sense the local environment, and it can make decisions on what it senses.

Goal (2) as we remember, goal (2) said it was useful to study collective motion of both natural and robotic groups. Natural groups can navigate, move about, forage, react to predators and reproduce. (Robots can't do this yet).

We need to define what goes on in nature so that we can design our robotic networks to efficiently perform their tasks. We must explain enabling mechanisms in natural groups, and equate this with defining mechanisms for robotic groups.

​Goal (3) is to impress upon us the importance of feedback in any system. Professor Leonhard put up a slide to diagram this process.
Using feedback and common mathematical frameworks, Professor Leonard described efforts to understand natural groups (fish) that move in patterns that seem highly choreographed and then put this understanding into designs for robotic devices that work with unprecedented efficiency.

The devices in this case, are submersible gliders that pump water in and out to change their buoyancy. This allows them to rise and fall through the ocean as they glide forward. A fleet of gliders recently deployed in Monterey Bay, CA to sample the waters for salinity, temperature, plankton depths, current direction etc. The search pattern and control system was designed here by Professor Leonard and her crew.

After a short Question and Answer period the meeting was adjourned at 11:30