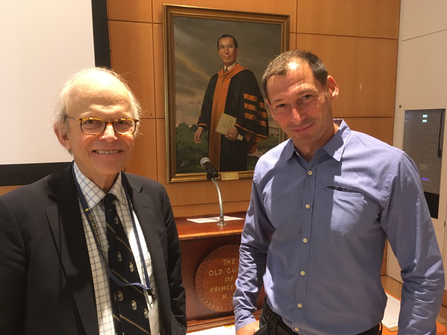 Minutes of the Second Meeting of the 77th Year

President Julia Coale called the second meeting of the 77th year of the Old Guard of Princeton to order on September 19, 2018. Arthur Eschenlauer led the convocation. Julie Denney read the minutes of the previous week, Edwin Stier’s program on “Making the Documentary that Exposed Russia’s Cheating in Sports.” Larry Hans introduced his guest, his wife Laura Hans.

A total of 90 members and guests attended.

Julia Coale announced that dues collection is going very well. Only 31 members have not yet paid. One can submit the dues to either Miquelon Weyeneth or Richard Ober.

Program Chair John Cotton announced that his committee will meet soon. While they have more than 50 suggestions for the Winter and Spring programs, additional suggestions are welcome, particularly if one not only knows of an interesting topic but has heard the speaker.

Julia Coale announced: Today we will recognize some Old Guard members who have rendered exemplary service to and furthered the purposes of The Old Guard since 2014, as provided in our bylaws, as follows:

*Ruth Miller and Owen Leach: Each for serving as Vice President, President, and Ex Officio for a period of six years.

*John Riganati: For serving as Recording Secretary for three years.

*Roland Miller: For serving as Recording Secretary and Chairman of the Website Committee for a total of six years.

*Charlie Clark: For serving as Treasurer and Assistant Treasurer for a total of four years.

*David Fulmer: For serving as Chairman of the AV Committee for three years and for producing the revised “History of The Old Guard" with Diana Crane.

*Diana Crane: For serving as Historian for four years and for producing the revised “History of The Old Guard.”

*Tony Glockler: For serving as Chairman of the Hospitality Committee for three years.

*Claire Jacobus: For serving as Chairman of the Nominating Committee for six years.

*Stephen Schreiber: For serving as chairman of the Program Committee for three years.

*Ralph Widner: For serving as Chairman of the Venues Committee for four years and for taking the lead in establishing the corporate status of The Old Guard.
​
PROGRAM
Landon Jones introduced Dr. Alexander Todorov, professor and associate chair of Princeton University’s Department of Psychology. The title of his talk, “Face Value: The Irresistible Influence of First Impressions,” is also the title of his recent book.

Physiognomy, the art of judging character from facial characteristics, practiced from ancient times, has its limits and has often been criticized, but it is still significant today. Why?

First, faces are special. Newborns would rather look at faces than inanimate objects, and studies show that primate brains—and sheep’s—contain neurons that respond selectively to faces—even crude images of them. Dr. Todorov showed a slide of a balloon-like “head” with two black dot “eyes” above and one dot “mouth” below, which caught infants’ attention. The same infants ignored an image with those features turned upside down.

Secondly, we all form instant impressions all the time. We cannot help it. These impressions, taking about 160 milliseconds, are compelling and, when shared, form stereotypes. Studies and experiments show that, while there are cultural differences, certain facial expressions and characteristics are stereotypically perceived as trustworthy or competent (generally the smaller, more feminine features) and others as untrustworthy or dominant (generally the more masculine ones). Many examples were shown, including videos morphing from meek (baby face, kind expression) to brutish (larger features, harsh expression).

The interpretation of first impressions depends upon the beholder. Examples showed that particular characteristics were more valued by particular people. For instance, while cadets looked for dominance, borrowers sought trustworthiness.

Variations in expressions are especially important if the faces are unfamiliar. A slide with 36 photos showing faces with many different expressions and characteristics, which could be interpreted in many ways, turned out to be photos of just two individuals.

Impressions are modified once one has more information about the person pictured. Another slide showed 20 varied photos of Leonardo DiCaprio and Brad Pitt, impressions of whom changed little, because much is generally known about them.

Initial impressions from faces have consequences. Prisoners who look hostile tend to have been dealt longer sentences. When blind orchestral auditions were introduced in the eighties, more women were selected.

Sadly, election outcomes can be determined by first impressions. While well-informed voters can make more informed decisions, the least knowledgeable will vote on superficial impressions.

Shared stereotypes influence impressions. An experiment guessing the political party of members of the House of Representatives showed that the expectation that women, non-Caucasians and young people were Democrats proved to be 62% accurate, not much more than a coin flip.

One must also be wary of “temporary information”. Sleep-deprived subjects were perceived to be less intelligent than those who were well rested. They probably were less intelligent, temporarily.

Recent studies in China tried to decide which faces were “criminal,” in Denmark which twin would live longer, and, at Stanford University, which facial features were gay as opposed to straight. However, as Professor Todorov said, “Images do not provide a magic path to character.”

Still, physiognomy will not disappear. We imbue faces with meaning. We try to discern people’s intentions, trustworthiness and competence, reducing the uncertainty of living with strangers. We cannot help it. We are wired that way.