The Polarization of  American Politics 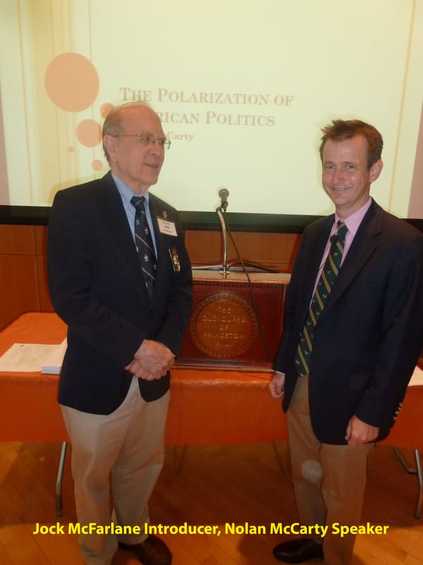 Professor McCarty spoke on the topic of “The Polarization of American Politics,” using data to separate fact from fiction in relation to three questions: Has there been an increase in polarization in American politics? If so, to what is this due? If so, what can be done about it?

Third Question: What can be done about the polarization?  Answer: Periods of low polarization may not be the norm in American politics and small fixes to the political system (e.g., changes in the electoral system, less gerrymandering of congressional districts, open as opposed to closed primaries, campaign finance reform) will not make the problem of polarization go away: “The problem is not how we get back to 1955 but how do we manage our politics going forward.”

A number of interesting points were made in relation to questions from members of the Old Guard. What about the role of independents? There does not appear to be a real increase in the number of independents. Those who declare themselves to be independent but leaning in one or another direction tend to vote in the same way as those committed to one or another party.  What about the role of the media? Polarization makes for good tv and often the media focuses on wedge issues.  Whereas during the ‘60s and ‘70s people relied upon the three major networks for their news, and these networks were relatively nonpartisan, today people can watch channels slanted toward their political point of view. One study found that when Republicans, Liberals, and Moderates were given the choice of watching Fox News, CNN, or Seinfeld reruns, Republicans chose to watch Fox News, Liberals to watch CNN, and Moderates to watch Seinfeld reruns.  What about the role of lobbyists?  “Although there has been an increase in the number of lobbyists since the 1970s, polarization probably has had a bigger impact on lobbying that vice versa.” Is polarization necessarily a bad thing?  It probably has some good things associated with it (e.g., it is easier to know what the parties stand for, it is easier to hold them accountable, it may increase engagement), but at some point the costs outstrip the benefits: “We now are at the point where instead of seeking to find common ground, politicians fight for principles regardless of the consequences for the country.”