An American Urbanist in the Suburban Nation 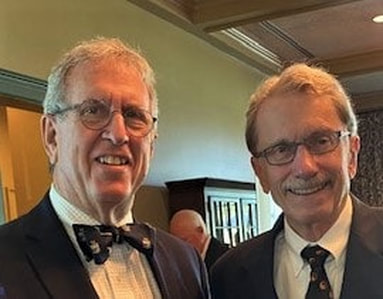 Stephen Schreiber, Introducer, and Richard Rein
​Minutes of the Third Meeting of the 81st Year
President John Cotton convened the third meeting of the Old Guard’s 81st year at the Springdale Golf Club on September 21, 2022. Irv Urken led the invocation. Ralph Widner read the minutes of the previous meeting. Greg Dobbs presented a membership report. [It follows these minutes.]

Guests were introduced by Al Kaemmerlen – Rick Kitto, who is applying for membership; John Kelsey – his wife Pam Kelsey; and Stephen Schreiber – the speaker’s guest, architect Marina Rubina.  The total attendance was 98.

Stephen Schreiber read the introduction prepared by Lanny Jones who was unable to be present. Richard Rein is known locally as the founding publisher and editor of the weekly U.S. 1 newspaper. He was a 1969 graduate of Princeton, where he was the chairman (editor) of The Daily Princetonian. He is currently editing TAP into Princeton Community News, an online community newspaper at www.tapinto.net.

Richard Rein began his talk by mentioning two events that had led to his writing American Urbanist: How William H. Whyte's Unconventional Wisdom Reshaped Public Life. The first was a serendipitous encounter with the creators of Dohm Alley, who agreed with him that this use of urban space was “right out of the William Whyte playbook.” [Dohm Alley is a walkway, from Nassau Street to a parking lot, which was repurposed to be an art gallery and occasional theatre.] The second was when he was reporting on the Princeton Town Council and learned that three tracts of open space on the north edge of Princeton had either been purchased, preserved, or were under litigation to prevent development. Both the open space on the edge of town and a central core downtown are central to Whyte’s philosophy. Our speaker pointed out that a town that can afford open space on the edge of town will have a vibrant town center. The word in urban planning that gives people angst is “density.” Mr. Rein wants to speak positively about density.

If you value undeveloped old growth forest land outside of town, you will want to see density with high retables downtown. If you think climate change is a problem, you will appreciate the energy efficiency of density. If you’re a fan of mass transit, you will like the density mass transit needs. If you’re tired of driving, you may like living in a walkable neighborhood. William H. Whyte liked density and thought about it long before other people did.

William Hollingsworth Whyte, nicknamed “Holly,” grew up in the open spaces of the Brandywine valley and the small urban town of West Chester, Pennsylvania. In support of his application to Princeton, the headmaster at St. Andrew’s school in Delaware referred to him as “an unusually brilliant boy whose temperament is such that he can scarcely be classified in the ordinary way.”  He graduated from Princeton in 1939 and, after a stint selling Vicks VapoRub in Kentucky, joined the Marines before the attack on Pearl Harbor.  He served in military intelligence for the Guadalcanal campaign (according to our speaker “military intelligence” is not an oxymoron)

After the war, Whyte got a job writing for Fortune magazine. Whyte and a few others at Fortune noted the unintended consequences of the postwar corporate boom and growing suburbs. Whyte’s book The Organization Man was on the best-seller list for most of 1957. He coined the word “groupthink” to represent the lack of individuality in business life.

Cities and the environment were also affected. In 1959 Whyte edited and wrote most of the essays in The Exploding Metropolis, a book by the editors of Fortune. It addressed the challenges to the urban environment that are still with us today.  These include issues of the separation of areas for poor or wealthy and the focus on planning for drivers and ignoring pedestrians.

In 1968 he wrote The Last Landscape, which was as much about the urban landscape as it was the rural landscape. This led to Whyte being known as an urban planner. He was asked to write a master plan for the City of New York in 1969. A plan was a requirement to obtain government funds. Many people were concerned about the crowded streets. Whyte said you should be more worried about empty streets. He also raised the idea of congestion pricing for traffic in Manhattan that’s still an unsolved issue.

Whyte began collecting data on how people actually used public spaces. The result was a film and a book, The Social Life of Public Spaces. Whyte noted the elements of a successful public space: sitting space, preferably with moveable seats; sun – trees – water; food – either available or brought in; the street as an access to the space; and triangulation, which is the meeting of two strangers who together have the same experience.

Mr. Rein then turned to examples of Princeton’s public spaces – the space created by moving the Dinky; Hines Plaza; the walkway adjacent to Thomas Sweet on Nassau Street; and the Palmer Square lawn, to name a few.  He also pointed to the density of apartment buildings, both existing and planned. He was unaware he had been living for 30 years next to a large house on a small lot with a density of 50 apartments per acre.

Finally, he reviewed two existing urban spaces in Princeton that will be changed in the near future – the former hospital parking lot on Franklin Avenue and the university’s Butler Tract on Harrison Street.

Which page of the Holly Whyte playbook will be used?