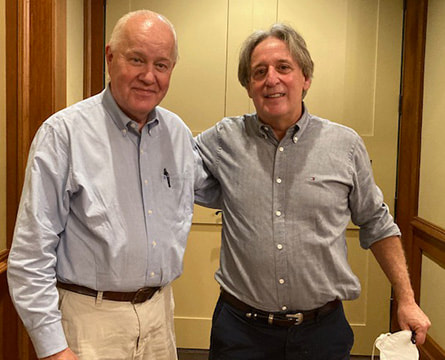 Minutes of the Third Meeting of the 80th Year

President Stephen Schreiber introduced the speaker, Ira Rosen, 70-episode producer and writer of the Emmy and Peabody award-winning investigative and interview television program, 60 Minutes, which has run for 53 years on CBS, often equaling or surpassing audiences for the Super Bowl in size. Rosen has written a book, Ticking Clock, from which treated the Old Guard to a few anecdotes that illuminated the key functions of a producer:  to find stories, cultivate the personalities to be interviewed, and script the broadcast.

Rosen described how he stumbled into the job. After graduating from Cornell, he tried out a number of jobs unsuccessfully, but happened to write a freelance piece about how to sneak into good seats at baseball games. Much to his surprise, while hitchhiking across the country in search of work, his mother informed him by phone that the New York Times was going to publish the piece and had sent him a check for $250. When he arrived in Sacramento, he went to see the publisher McClatchey at the Sacramento Bee. When asked whether he had ever published anything, he pulled out the only thing he had— this New York Times piece. McClatchey hired him on the spot, but he lasted only one year because he kept misspelling Latino names in the San Joaquin Valley.

He finally landed a job in New York on a local television channel and happened to produce one program about how easy it is to obtain military secrets. By chance, it was seen by a projectionist at 60 Minutes who alerted Don Hewitt, executive producer and the program’s originator. When Hewitt telephoned Rosen’s home, his mother answered. Hewitt said he wanted to offer Rosen a job; his mother replied that he already had one, said she was baking kugels, and hung up. When she told Rosen, he quickly called Hewitt back to find him laughing uproariously. “I really like your mother,” Hewitt said.

Hewitt assigned Rosen to work with Mike Wallace, known among his colleagues as a great interviewer, but a mean, tortured man very hard to work with who needed a filter on his mouth. "What can you do for me?" Wallace asked Rosen. Rosen spotted a tennis trophy behind Wallace and said that he had played on the Cornell tennis team. Wallace said his knees had gone bad and no longer played well. Rosen said his had too. That did it. Wallace said, "I’m rude, but I produce great stuff." When Rosen called his mother to tell her that he had a job with the number one news show in the country, she was unimpressed.

Early on, Rosen was working on a piece about Joe Bonanno, boss of the Mafia crime family. This prompted Rosen to contact Marlon Brando because of the actor’s portrayal of such a character in the film The Godfather. Much to his surprise, when he telephoned, Brando himself answered. This turned into a year-long relationship during which the actor tested Rosen’s ability to speak Yiddish (he doesn’t), required him to listen to long readings from the works of William Saroyan, and to assess the character of various public personalities, including Charlie Chaplin. The year-long courtship came to an end when Rosen took Mike Wallace out to Beverly Hills to meet with Brando.

The actor picked them up in his Rolls Royce. When Wallace and Rosen expressed alarm at his speeding through every red light en route to a restaurant, Brando retorted, "Be a man!" At the restaurant, the waiter was very nervous, his hands shaking as he realized he was serving Marlon Brando and Mike Wallace. Compounding the poor fellow’s tension, Brando told the server he was studying his hand movements so that he would know how to portray a waiter when the time came.

Brando had become quite obese by this time and Wallace asked him why. He replied that he frequently picked up a quart of Baskin & Robbins ice cream in order to test all the flavors. He had no alternative but to eat the whole quart. Then Wallace asked him how many kids he had. Brando replied, maybe four, but that he never said so because he wasn’t sure whether he was the father. When Wallace said that he didn’t want Brando on the program because he didn’t think the public should know what a fool he was, Brando responded, "Good, now we can be friends!" That ended the courtship.

Nonetheless, after a nearly four-year courtship, Rosen did succeed in securing Wallace an interview with Mafia boss John Gotti, who had succeeded his father as head of the Bonanno crime family. A tortured personality like Wallace, Gotti had confessed to Rosen that he hated running the mob and had a sense of self-destruction. Over the objections of all of his lawyers, Gotti finally agreed to go on the air. The interview was considered the most classic and most-watched 60 Minutes of all time. Rosen’s relationship with Gotti evolved even to the point that Gotti spoke at Rosen's retirement dinner at the Harvard Club.

Rosen then described how his efforts to put together a Wallace interview with physicist Edward Teller, so-called "Father of the H-Bomb," and his Soviet counterpart, Andrei Sakharov, brought an end to his tenure at CBS and 60 Minutes. Wallace wanted very much to interview Teller, a very controversial figure at the time. When Rosen discovered that Teller would only answer questions about matters in his recently published book, he opposed bringing Teller on the program, but Wallace insisted because "I think conflict is great." When Teller came for the interview, they ran the wire from his microphone under his shirt and taped it to the chair, so that he could not get up and walk off. Wallace kept him there and secured an incredible story.

As a counterfoil, Rosen wanted to bring on the physicist instrumental in the Soviet H-bomb program, Andre Sakharov, who had since become a peace activist. He and Wallace flew to Moscow, where they learned from Sakharov that the accused spies Julius and Ethel Rosenberg had provided scarcely any information about U.S. bomb research that was helpful to the Soviets. The Soviets learned more from analyses of the fallout in Siberia from U.S. bomb tests in the Pacific. The translator was so terrified at what was being discussed that he refused to translate. So Sakharov told Wallace and Rosen everything in English.

When Rosen scripted both the Teller and Sakharov interviews for broadcast, Wallace took out all of the Sakharov material and aired only the Teller interview over the objections of both Rosen and Hewitt, who felt the combined interviews were a superb contribution to public knowledge. Nonetheless, the program won an Emmy. By this time, Wallace wanted to trade in Rosen, so Rosen left to be a producer of Prime Time at ABC, eventually working with Mike's son Chris Wallace, a very different person from his father and whom Rosen came to regard with considerable respect and affection.

In response to a question, Rosen said that his interview with former President Carter and his wife, Rosalyn, turned out to be one of the most illuminating and that his biggest flop was an interview with a security guard at the Moscow embassy. What he thought might be his biggest coup was to gain entrance for interviews in the National Security Agency, only to find, after freely wandering the halls and interviewing people, that they had him confused with another Ira Rosen.

His biggest disappointment was to never get Marlon Brando on camera.

Mike Wallace died with dementia, at the end, never remembering his work on 60 Minutes.