​A Conversation With Pia de Jong:
Moderated by Lanny Jones 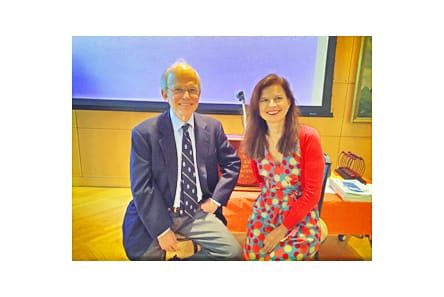 Landon Jones, Introducer Pia De Jong, Speaker
Minutes of the Second Meeting of the 74th Year
The presiding officer was Owen Leach. The invocation was led by Shirley Satterfield. The minutes of the preceding week were read by Owen Leach. Attendance was 105. The hosts and guests were:

A Conversation with Pia De Jong: Moderated by Lanny Jones

Lanny Jones introduced Pia de Jong, a Dutch writer living in Princeton. She is the acclaimed author of two novels, two books for children, and many, many newspaper columns and short stories. She is the mother of three children and her husband is the director of the Institute for Advanced Study.

After being uprooted to Princeton from her life and writing career in Amsterdam, Pia agreed to write a weekly column about her life in America for a major Dutch newspaper. She and her family arrived in Princeton in September 2012, exactly 156 weeks ago. Her 580-word column has appeared in NRC Handelsblad every Tuesday since then.

Additionally she blogs for The Huffington Post, writes a monthly column for The Princeton Echo and has had two short stories published in The Antioch Review. Her new book, a memoir called “Charlotte,” is to be published in January. Many of her articles are on her website: piadejong.com.

Lanny explained the format. “Pia will make a few remarks and then read from some of her columns. Then, she and I will talk about the nitty-gritty of writing. So today’s program is about what and how Pia writes.”

Pia began her remarks by saying that she had almost decided to cancel her column assignment. After all, the Dutch have virtually immediate access to U.S. movies, newspapers and magazines. What could she offer?

As she said, “How am I going to surprise the people of Holland?”

But as soon as she arrived, she found her material, or it found her. Soccer! There are no sports teams at school in Holland. But before she knew it, she was a Princeton soccer mom. She knew the term already -- kind of a pejorative word or a badge of honor, depending on whom you ask and what time of day.

“My children were independent in Holland. From the age of 6, they had their bikes and they got around on their own. We don't have helicopter moms there. But soon I was an active soccer mom.”

And so began her series of portraits of people and life in Princeton, which is not exactly typical America, but is a perch from which to make amusing and perceptive observations about life in the United States. “The columns bring people in Holland closer to America because they have small insights that they can't get anywhere else,” she said. The columns generate a lot of appreciative responses from readers “who think I am their little niece in America.”

Here is an excerpt from her first column:
Lanny then talked with Pia. Here is a sample of their exchange:

Lanny: How do you know when you have a good idea for a column, that it is an idea that will really work?

Pia: Of course you never really know. But it has to be an idea that captures me, that touches me and gives me energy. Finally then, I have a sense that it will resonate with the Dutch also.

Lanny: Pia has said that she is a novelist and you can sense that in the way her columns are written. They are really short stories. What were your preconceptions before you came to the U.S.?

Pia: In Holland everyone knows Americans are superficial and shallow, with no deep friendships. Americans say hi and goodbye because they move all the time. Of course we know that's not right, but that's what we say. There is a bit of a love-hate relationship. There are many things about America that we admire – your lack of boundaries and your openness.

She then read a column she wrote this fall about 9/11. It was set at Princeton High School during a soccer game and was about a Princeton father who died on the plane that crashed into the ground in Pennsylvania on Sept. 11, 2001. His son was on the soccer team and his widow was in the stands. There was no need to create a monument; the team made their own tribute to a hero.

After a few questions, she read her column from last week. It was about B.J. Miller, a Princeton undergrad who in 1990 was horsing around with some friends and climbed on top of the Dinky. His metal watch connected him to 11,000 volts of electricity. Pia and her husband were living nearby in Princeton then and she had always remembered the sirens and the story and wondered what had happened. She assumed that the boy had died.

Recently she read an article about him. He lost three limbs, but overcame his situation and was informed and inspired by it. Now he runs a hospice in San Francisco. “My clients know what I've been through,” he says. He’s not afraid of death, but he is afraid of not living.

A few questions followed.
Q. Is there anything you would import to the U.S. from Holland?

A. Get rid of helicopter moms. Trust kids more and let them go. The most important part of raising a child is to let them go. Of course, if there are problems you get involved.

She did concede that she has moderated her approach.

Q. How do you write a memoir? How do you know what to put in, and what to leave out? And how do you recall the good stuff?

A. That's the hardest part. You know when something resonates with you. You can feel it inside. You can use color or smell or something sensory to awaken your memories. Then get to work and write it down.

You also have to get into the mood, by doodling or listening to music or using something that reminds you of your experiences, perhaps from childhood.

To conclude the program, Pia read two short excerpts from her coming memoir and talked about some of the mysteries of the writing process.

Pia: Our daughter Charlotte was born in 2000, and diagnosed at birth with incurable leukemia. The only treatment for a newborn with cancer is with severe chemotherapy. I had just given birth and was still in animal protective mode and the medication offered little hope. So we just took the baby home. We didn't treat her at all. Within a year, she went into what they call spontaneous remission.

She was closely followed by the cancer specialists in Holland. As a result, now the treatment for infant leukemia is to watch and wait and not treat these children right away.

Pia then read two sections of her forthcoming memoir. This one describes the moment when she and her husband, Robbert, decided to walk out of the hospital with baby Charlotte. Here are excerpts:
Pia: I was very shaken and didn’t want to return to my previous work. I had three children under the age of 5. I started writing when Charlotte was better. I wrote little lines. I started with poetry. I wasn’t intending to write a book.

Today, I basically write all the time. I have to stop myself from writing. I can write a thousand words per day, but if it is for publication, I go back and work on each sentence.
It’s really tiring, but I can't stop writing. I write primarily in Dutch, but I recently wrote a piece for The Antioch Review in English.

Q. Do you write about politics?
A. No, because it is so much covered in the press. But I might be tempted when the elections become closer, especially if can meet one of the candidates if they come to Princeton.

Q. Will you compare expressiveness of different languages?
A. I love the English language. It is so rich, so expressive. I love the one-liners and wish I were better at them. English is a quicker, faster, funnier language.

Q. What's the secret to Holland’s staying power?
A. Tulips! We are a socialist country. Very small with no very poor or very rich people. We’re very entrepreneurial and the school system very good.

Q. Why isn’t the food better in Holland?
A. There is good food to be found, but we are very boring eaters. Remember Van Gogh’s painting of the potato eaters? Most everyone has milk, cheese, and bread for lunch. Even the prime minister.

There was one final question that Pia didn’t answer:
Are you going to write about the Old Guard?