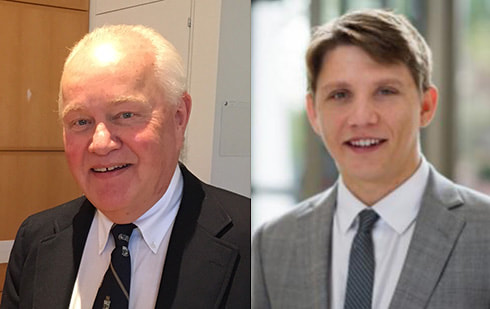 John Cotton, Introducer, and Rory Truex
Minutes of the Third Meeting of the 79th Year
President Schreiber opened the meeting at 10:17 AM. The meeting was held on Zoom due to the Covid pandemic. A total of 128 Old Guard members and guests were in attendance. Ralph Widner read the minutes of the September 16th meeting. President Stephen Schreiber read the names of 14 prospective new members, which previously had been advised to the members. Upon motion, the membership of all candidates was approved by unanimous vote.
​
Our guest was Rory Truex, Assistant Professor of Politics and Public Affairs at Princeton’s School of Public and International Affairs. John Cotton introduced Professor Truex, who did his undergraduate work at Princeton and his graduate work at Yale.  Professor Truex said that Princeton has been very strong in China studies for a long time and currently has the best Chinese language program in the country. He indicated he would briefly discuss the title of his talk, “Xi for Life? What Does it mean for China and the World?” and then invite questions on all matters relating to China.

Professor Truex often asks his students to name the most important date in modern Chinese history. He gets answers such as 1949, the Communist takeover; 1978, the crisis in agriculture; 1989, Tiananmen Square; 2008, the Olympics opened China to the world and 2020, clashes with the U.S. He argues it may turn out to be 2017-18, the election of Xi Jinping to a second term and the beginning of what is becoming strong authoritarian rule.

While the government has been under the firm control of the Communist Party since 1949 and the country has always had authoritarian rule, there has been a measure of orderliness since the death of Mao. Among the senior leaders there was a certain collegiality in their decision making. Rulings were responsive to popular will and the party’s desire to maintain a high degree of popularity among the masses. Changes in leadership were very orderly; the Communist constitution limits the head of state to two five-year terms and it has become customary to appoint his successor as vice chairman during the chairman’s second term.

Xi’s first term, which began in 2012, was not exceptional; beginning with his second term in 2017, he has been much more authoritarian and some of his actions, such as failing to identify a successor and to name himself in the party’s revised constitution, prompts speculation that he will change the rules to allow him to continue as Chairman with enhanced powers beyond 2022.

Developments to watch include the rise of nationalism, increasing censorship and persecution of minorities, with the declining influences of non-government groups and civic society in general. The final test will be whether a successor to Xi in 2022 will be identified soon. Will there be a successor in 2022 or might we have Chairman Xi for life? That is the question.

He indicated that both China and the U.S. may be considered to have nationalist and populist governments today. While the tone may soften and U.S. policy making may no longer be determined by officials not well-versed in Chinese matters, the rivalry and strained relations will likely continue if Joseph Biden is elected, due to rising Chinese nationalism and authoritarianism as well as their rapid economic expansion. Their search for raw materials from developing countries, particularly needed fossil fuels will continue and their strained relations with Japan will remain essentially unchanged as long as the U.S. maintains its position in the Western Pacific.  China has the capacity to take over Taiwan, at which their military is heavily focused, but they will probably conclude that a confrontation is not worth the cost. Both China and the U.S. were slow to respond to the Covid crisis; it is characteristic of mid-level and regional officials in China to be slow in acknowledging problems and negative happenings. Under a socialist-style universal health care system, medicine in the cities is now almost up to western standards but is still quite primitive in rural areas.

The Chinese government currently is very popular among the people and this has enabled the government to take strong measures to reduce their serious pollution problems and to cooperate with other governments on international issues. However, the increased authoritarianism has resulted in growing discrimination and repression of minorities by the 90% Han population. Getting accurate news and information from China also has become difficult; the offices of all major U.S. papers were ordered closed and scholars doing research have experienced growing complications. However, except for tech companies doing work with military applications, business people and travelers visiting China should have no problems developing relations as long as they do not engage in any corrupt or questionable activities.