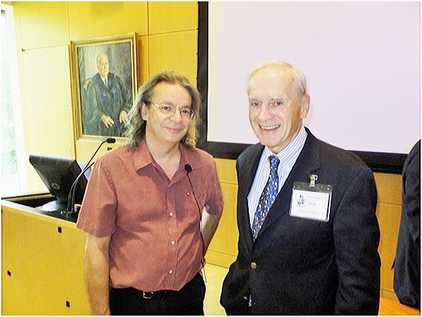 President Leach asked for a moment of silence in memory of Ted Vial. He reminded us to pay our Old Guard dues if we have not already done so. He encouraged members to lend their expertise to Old Guard committees - in particular the nominating, audio-visual and website committees. He announced the time and place for today’s meeting, our speaker to be Christopher L. Eisgruber, 20th President of Princeton University and member of the class of 1983. His topic will be “The Value of Liberal Learning.”

Professor Burnham – after respectfully acknowledging the Old Guard’s tradition (and appearance) began with comments about Beethoven’s monolithic prominence in the musical landscape of western culture. The extraordinary acclaim attached to his name for the past two hundred years is no accident, but rather praise due to a composer who transformed musical experience forever.

Why was Beethoven different?  He was more than a composer. His music broke the familiar aesthetic rules and spoke personally to his listeners. The view of Beethoven as an embattled artist has had a pervasive impact upon western culture. Biographies, anecdotes and letters have portrayed his life as martyrdom for the sake of art.  The sufferings that he had to overcome - both physical and spiritual - are legendary.  Here was a deaf composer struggling with affliction and vocation. Here was a lonely man longing for intimacy, familial and social connection, whose deep frustration spawned an unprecedented outpouring of music. Sources at the time proclaimed Beethoven’s music to be the language of the human soul, universal and personal. Victor Hugo claimed that “in Beethoven’s music the dreamer will recognize his dream, the sailor his storm, and the wolf his forest.”

How did Beethoven’s music do this? Energy. Beethoven’s music unleashed a new and visceral power that swept his listeners into heights and depths heretofore unknown. Professor Burnham left the podium, turned on the music and buoyantly led us through a series of musical comparisons that both transformed and transfixed his audience. The first comparison was between minuets – one from Haydn’s ‘Surprise Symphony’ and the other from Beethoven’s 1st Symphony. Haydn’s minuet followed the accepted musical style of the period in its courtly pace, its tone and its predictable outcome. In contrast, Beethoven’s minueto burst the bounds of the inherited style and shot its melody like an arrow into the air: fast, free, flexible.  During Haydn’s music, Professor Burnham assured us of the composer’s rhythm, wit, elegance and convention. During Beethoven’s music, he likened Beethoven to a crazy driver whose speed forced new pathways through space.

Furthermore, Beethoven heightened the rhetoric of the classical Viennese style, as demonstrated by Professor Burnham’s comparison of Beethoven with Mozart. Whereas Mozart’s paired phrases were undergirded with predictable tonic or dominant harmonies, Beethoven turned the standard phrase structure upside down. Rather than throw the traditional structures completely away, he rebuilt them as frames to withstand the musical earthquakes he created. Up to that point, symphonic structures had been very well behaved within fixed limits. Professor Burnham drew many an “A-ha!” from his enthralled audience. (They even responded to the point of intoning one of Mozart’s phrases.)

In addition to creating new energy and heightened rhetoric, Beethoven mythologized the thematic process started by Haydn and maintained by Mozart. Professor Burnham first played the opening measures of Mozart’s 41st and Haydn’s 104th symphony, both of which begin with a formal, ceremonial fanfare. By contrast, Beethoven’s transcendant 3rd Symphony, ‘Eroica’ begins with two unceremonial earsplitting chords that “spank the orchestra into life.”  These chords signified a big change in the structure of the classical symphony forever. They launched a nascent theme that emerged gradually, sometimes visible, sometimes obscured, sweeping upward and outward until it finally pierced all clouds of harmony to soar freely. Professor Burnham described this theme as something that goes beyond the biography or history of a particular hero - to the very idea of a heroic journey – in the process of reaching its destiny. We listeners followed the twists and turns of the symphony’s sweeping narrative: to the battlefield, the fire, the clash of opposing forces, the triumphant finale.

Beethoven’s thematic innovations, his revised rhetoric, his energy and daring, his seemingly reckless speed were all in line with the emerging cultural changes of his time.

Our questions mainly revolved around Beethoven’s personal history and Professor Burnham’s opinion regarding modern music and musicians. In his role as conductor, Professor Burnham finally waved us on our way to listen to the 3rd symphony with new ears.