Climate and Weather: Order in the Chaos

​Gabriel Vecchi
Professor of Geosciences and the Princeton Environmental Institute 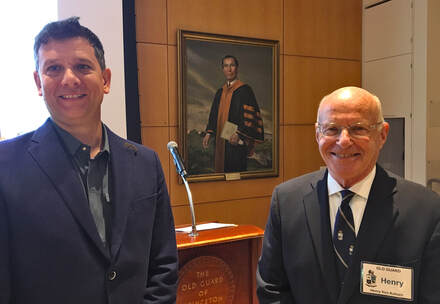 Minutes of the Third Meeting of the 78th Year

President Julia Coale called the third meeting of the 78th year to order at 10:15 AM.  One-hundred thirty-five Old Guard members were in attendance. There were no guests.   Joan Fleming led the invocation. Jared Kieling read the minutes of the September 18th meeting. Treasurer Miquelon Weyeneth reported 28 non-emeritus members still owe 2019-2020 dues of $50, which increase to $75, if paid after October 15th.

Henry von Kohorn introduced the speaker. Gabriel Vecchi, Professor of Geosciences at Princeton University holds a B.A. in Mathematics from Rutgers University and multiple degrees from the University of Washington, including a Ph.D. in Physical Oceanography. While he has been a member of the Princeton faculty only since 2017, he has been in Princeton since 2003, working with the Geophysical Fluid Dynamics Laboratory, a climate science think tank.

Professor Vecchi, whose research focuses on climate science and extreme weather events, is also a member of the Princeton Environmental Institute. Founded in 1994, the Institute advances understanding of the Earth as a complex system that can be influenced by human activities.

To mark its 25th anniversary, on October 24th and 25th at Alexander Hall, the Institute is conducting the Princeton Environmental Forum, a conference featuring Princeton faculty and alumni environmental leaders addressing urgent issues for the 21st century. At the conference Professor Vecchi will be moderating a panel entitled “It’s Getting Hot Out There … Weird Weather and Other Climate Change Anomalies.”

When Hurricane Dorian was recently in the news, Professor Vecchi was quoted in the New York Times; and Jake Tapper interviewed him on CNN regarding Dorian’s prognosis.

Professor Vecchi lives in Princeton with his wife and two young children. In his spare time, he likes to play ice hockey, which enhances his interest in climate change, lest he have to take up water polo.

The speaker’s topic, “Climate and Weather:  Order in Chaos” reminded me of a frequent lament of renowned climate scientist Garrison Keillor, who, on his radio program “Prairie Home Companion,” frequently lamented that if you live in Minnesota, “every few months, Mother Nature tries to kill you.”  Well in turns out Mother Nature is interested in us too.

Professor Vecchi’s first slides showed pictures of utter devastation caused by tropical disturbances, whether called cyclones, typhoons, or hurricanes, a word sourced to ancient Norse mythology. The average number of severe cyclonic storms has been about 90.  Sandy, which affected us, Harvey, and Dorian provided take-your-breath-away evidence of the power of such disturbances. His talk proceeded to introduce us to a complex world of climatology, where we learned that “it’s not that simple,” and everything you hear in the media is not necessarily scientifically accurate.

First the speaker offered definitions:
“Weather” is the specific state of the earth’s atmosphere at a single point in time; “climate” is a prediction of probable weather at future points in time. Or: “Weather is what you dress for; climate is what you pack for.”

Dr. Vecchi explained the general mechanisms of tropical cyclones, which are basically heat energy redistributions systems that result in a triple-threat of devastations: wind, rain, and tidal flooding, the third of which results in the greatest loss of life. Necessary ingredients are warm water, moist atmosphere, and weak upper air winds, as jet stream quality “wind shear” prevents of the formation of cyclonic events by shearing the tops off nascent storms.

Tropical cyclones occur in all tropical and sub-tropical regions of the world except on the east and west coasts of South America, where  upwelling of cold water caused by prevailing surface wind direction is unfriendly to storm formation.

Since 1860, typically one or two major (category 3 and above) hurricanes have made landfall in the United States. In 2006 there were four, and, since then, almost none. Why this “drought” of major hurricanes is occurring remains a subject for study. However, in 2017, three major calamitous storms took place over U.S. territory: Irma, Maria, and Harvey. In 2018 Florence and Michael did terrible damage. Fewer, but more dangerous storms may, indeed, be the result of climatic changes, said the professor.

Counting storms in pre-historical times, or “paleo-tempestology” as the speaker defined it, has had an interesting history over time. One of the slides showed a dramatic increase in reported storms in the southern part of the northern hemisphere starting in 1914. What happened? The Panama Canal opened, pushing far more shipping activity into a previously unimportant region, dramatically increasing the number of ship reports of severe storms.

To delve deeper than the vagaries of ship routings, Dr. Vecchi and his colleagues have developed a “global dynamic modeling project,” dividing the world into hundreds of 50-kilometer grids to measure, among other variables, “solar radiation, continental land use and atmosphere composition, including CO2, ozone, aerosols, volcanic activity, etc.” Water vapor increases appear to have played a major role in observed increase in “R.I," or rapid intensification events, a cyclonic characteristic associated with increased devastation and loss of life, particularly Camille and Andrew.

A significant observation emanating from Vecchi’s work is that forced de-aerosolization may have masked the impacts of increased green house gases during the 1980s and '90s, and, with that masking having run its course, the first decade of the 21st century was a time when environmental warming became more evident.

But wait a minute. Core samples from Mullet Pond on the Gulf Coast of Florida has revealed that the peak hurricane period when ocean sediments overran continental sediments peaked about 2500 years ago with typically six major hurricanes estimated to have made landfall per year. So variability in occurrence of major hurricanes may relate to factors other than industrial age burning of fossil fuels. In the past 1000 years, estimated activity peaked in the early 1400s.

But we do know that the number of hurricanes and the severity of their impacts are not necessarily the same thing. For example, warming of oceans and land-ice melting, going on since the ice age, allow more water vapor and higher sea levels to produce greater rainfall, and thus flooding and storm surge impacts are increasing. Global mean sea level has risen 80 millimeters, or about 3.1496 inches, since 1993, according to satellite measurement. At this rate, Lake Carnegie, at 135 feet above sea level, will become ocean front property in about 1,071 years. But seriously, as time passes, according to Professor Vecchi’s research, increasing urbanization produces increasing density of structures and greater heat island effects that can accelerate coastal warming and enhance the strength of cyclonic activity, even if there are fewer storms. The speaker estimated that paving and other runoff disruptions caused by urbanization increased the impacts of Harvey’s flooding by 20 times.

The key future risks, according to our speaker, are the combination of sea level rise, persistent precipitation hanging on and on in limited areas (think Harvey and Houston), and overall demographic resistance to limitation of building in coastal danger zones.

Professor Vecchi concluded his talk with a single slide summary of where we are:
Questions included: “Why can’t weather forecasting be better?”  The professor answered that forecasting IS much better in low and high latitudes, but we middle latitude people are stuck at about three to seven days accuracy of weather forecasting.

And “Why is there disagreement among computer models forecasting hurricane tracks?”   He answered that any minor error in the earliest part of a forecast increases geometrically in the later stages of a forecast, hence, increasingly wide variance a few days out from the date of forecast. He stated that a model known as the European Model has historically been the best, but the Princeton Plasma Physic Laboratory (PPPL) has now developed a better one. Go Princeton!