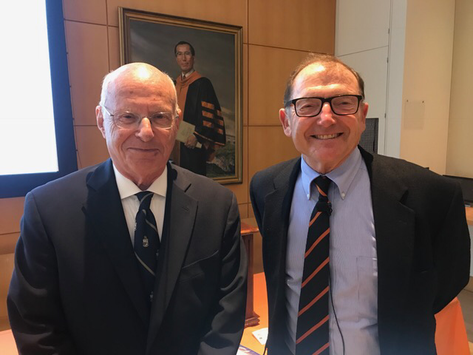 Minutes of the Third Meeting of the 77th Year

,The meeting was called to order at 10:15 a.m. by President Julia Coale. The invocation was led by Julie Denny. Ruth Scott read the minutes of the previous meeting. Mark Bergman was introduced by Dermot Gately. Cecilia Mathews was introduced by her husband Michael Mathews. There were 106 members and guests in attendance.

Professor Kornhauser presented business cases for three types of markets: 1) safe driving; 2) self driving; and 3) autonomous driving (which he called "driverless" driving).  All three business cases are built upon the fact that the cost of replication for software, once fully developed, is approximately zero. One key equation rules all three markets: the cost of the technology must be less than the net present value of the expected reduction in the cost of liability.

Early ideas, beginning at the 1939 New York World's Fair, concentrated on automating the highway to be able to handle existing cars. By the 1990s it was firmly established that this approach was far too expensive. In 2005 the Defense Advanced Research Projects Agency (DARPA) began funding what turned out to be a sequence of challenges for vehicles that can go anywhere in any terrain. Professor Kornhauser and his students at Princeton University were one of the dozen or so competitors selected in the first grand challenge, and General Motors donated a car that they were able to modify to participate in the competition. The parts used in the modifications came from consumer items such as the electric motor from an electric drill and the game controller from a video game. For sensors, they used video cameras and radar to control items such as braking, steering, lights, horn, and acceleration. Alas, in the final competition they were able to travel only 9.8 miles of the 150-mile course that DARPA had defined. Nevertheless, Professor Kornhauser considers the effort a success because of the steep learning curve that he and his students engaged in.

Meanwhile, in part inspired by the DARPA challenge, the commercial world was moving at a considerable pace, especially with regard to the development of new safety features.

Driven by the succinct motto, "Wouldn't it be better to avoid a crash in the first place?" companies such as Subaru developed a panoply of features that brought safety to the fore. These include items such as pre-collision braking & throttle, lane departure and lane sway warning, lane keep assist, reverse automatic braking, steering responsive headlights, blind spot detection, pedals that collapse into the floor if the front airbag deploys, an engine that goes down under the passenger compartment in case of a frontal crash.

Similar improvements in self driving showed advances such as automated cruise control to enable setting a following distance to the car in front of you and controlling the throttle and braking automatically.

But the most dramatic advances are happening today in the third business case for autonomous driving where at least ten serious commercial explorations are underway, led by dramatic investments by Google's Waymo. From one experimental car in 2007, this year Waymo has purchased 62,000 cars and clearly intends to deploy them at centers throughout the country.

Professor Kornhauser took the opportunity during the question and answer session to present additional points about the environment in which safe, self, and autonomous driving is developing.

Autonomous vehicles exist for farms, golf, mining, and for a number of other commercial applications. In the insurance industry, as safety increases the total dollars required to be spent on insurance decreases but the profitability is rising dramatically. Most trucking companies, for example are self-insured so this is extremely important. Professor Kornhauser made the comparison to the video tape market where once-upon-a-time, a rapidly changing business environment allowed Netflix to replace Blockbuster.  He stated that new insurance companies are in the process of replacing existing insurance companies. In commercial transportation, he stated that because inexpensive goods go by rail and expensive goods go by truck, truck drivers can be "expensive babysitters" and the increased safety will decrease the cost of transportation while allowing the wages for truck drivers to be increased. He presented a number of state-of-the-art developments: precision maps to the centimeter level being deployed by Waymo; data released by Tesla in Paris, showing the sensor output for every object the car has encountered; tough ethical dilemmas that are too rare to have any effect on the market place; and he alluded to vehicle to vehicle connectivity coming with the development of 5G communications.

Professor Kornhauser emphasized that there will always be a false alarm rate so that tragedies will happen--- though at a very, very low percentage rate.