September 27, 2017
​
Building Bridges:
The Role of Academic Libraries
In a World of Changing Expectations 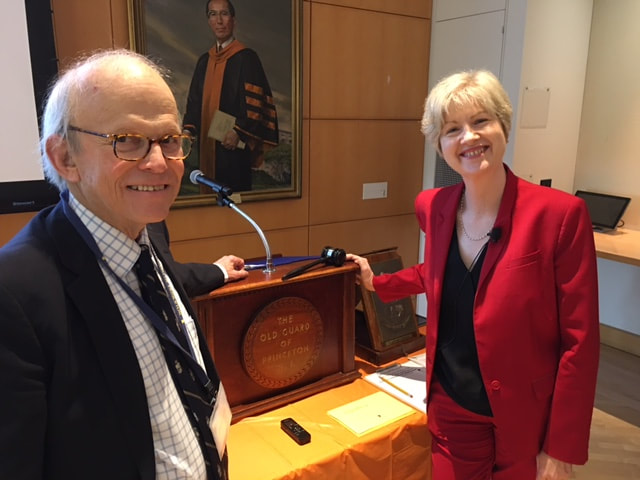 Minutes of the Third Meeting of the 76th Year

On Sept. 27, 2017, at 10:15 a.m., President Jock McFarlane called the third meeting of the 76th year to order. Julia Cole led the invocation and Richard Fenn read the minutes of the previous meeting. There were 112 Old Guard members in the audience. No guests attended.

Landon Jones introduced the speaker, Anne Jarvis, Robert H. Taylor 1930 University Librarian, who arrived at Princeton just one year ago. She was born in Ireland and did her undergraduate studies in history at Trinity College, Dublin, home of the famous Book of Kells manuscript. She holds a diploma in library and information studies from University College Dublin, a master’s degree in communication and cultural studies from Dublin City University and a Master of Art from Cambridge.

In 2000, she moved to England to become the deputy librarian at Cambridge and nine years later rose to become University Librarian, during which time the university celebrated its 600th birthday, in 2016. She was that academic library’s first female director, and she holds the distinction of being the first Cambridge University Librarian to resign since 1889 -- most of her predecessors died in office. Simultaneous with her appointment to Princeton, her position became endowed, and she is the inaugural Robert H. Taylor 1930 University Librarian.  Princeton University Library comprises Firestone Library and nine special libraries, serves 10,000 students, faculty and visiting scholars and holds collections of more than eight million printed volumes, extensive digital holdings, rare books, prints and archives.
​
The University Librarian is the strategic director for library services -- research, teaching and learning -- for its various constituencies. The dizzying amount of information she provided about the research life cycle during our meeting left this note taker breathless and exemplified the warp speed in which academic librarians must adjust and respond to the constantly evolving 21st century information environment and the demands of its stakeholders.

Libraries play a central and critical role within the academic community, while simultaneously needing to embrace change and respond creatively to new service needs.

In the mid-1980s, predictions abounded that we were moving into a paperless information society. With the acceleration of scientific and technical developments and the move to a global economy, libraries, like other service arenas, needed to respond to those rapid changes and demands with a greater capacity for innovation, personalization, creativity and partnerships.

In times past, libraries were repositories for books and manuscripts and students and scholars needed to go to a building to examine the resources. But today’s users are not bound by geography. Instead, they work with a distributed global network of resources that includes online journals, e-books, digital and digitized archives. This has made for fundamental changes in academic library operations, services and building designs. Academic libraries are the catalysts for discovery, learning, collaborations for scholarly communications and innovative digital resources while remaining steadfast in their traditional strengths of acquiring and maintaining great collections.

The bridges now being built by academic libraries impact on developing collections with the collaboration of donors, dealers and faculty; supporting research by partnering with faculty and the scholarly community and by developing services that users need, rather than what librarians think they want. Ms. Jarvis provided a number of illustrations on those themes but emphasized that uppermost to those foundations must be the institutional context. No one size fits all locales.

One of the challenges of the 21st library is the tension between print collections and the changing nature of disciplines, where the digital world makes accessible more information -- especially non-humanities -- than is available within the library building. This necessitates new ways of organizing and disseminating web resources and its evolving formats.

Librarians are more than ever involved with the teaching and research missions of academic departments, for example with instructional designs, information literacy, data management and digital humanities. Princeton’s library staff has recognized that students use electronic search engines, but still prefer print materials to read for more than a few pages. With the current climate of shrinking budgets and increasing focus on digital collections, students and faculty are fortunate to have access to cooperative ventures like the HathiTrust Digital Library, a digital book initiative, which offers 15.5 million volumes, digitized from 120 global libraries. Likewise, Princeton is part of the International Image Interoperability Framework, a collaborative that provides access to image-based resources from the world’s leading research libraries and image repositories. The I.I.I.F. developed through its partnerships the infrastructure to surmount the balkanization of the internet’s image-based resources that were locked up in silos with restricted access to locally built applications.

Lest we think that the new digital resources will supplant the book and manuscript collections that were the obsessions of bibliophiles, Ms. Jarvis described collaborative acquisitions for rare manuscripts with her account of the purchase of a Guttenberg Bible fragment offered for sale at a 2017 antiquarian book fair in Germany. Given that Princeton has the leading center for Guttenberg-related studies and has embedded book history into the curriculum, the new vellum fragment fit the university’s focus on the early history of Western printing. Ms. Jarvis worked with the book dealer, faculty and alumni to prevail over 76 other bidders in bringing it here.

Another example of libraries’ collaboration is GeoBlacklight, developed by M.I.T., N.Y.U., Stanford and Princeton as an open-access geospatial application. Users can access a rich collection of geographical databases that provide geospatial boundary and statistical information as well as gather and manipulate imagery for GPS, satellite photography and historical data.

The many emerging technologies allow numerous opportunities for academic libraries to expand and present their collections to new audiences beyond Princeton’s borders. This represents one of the strategies for preserving, collecting, organizing and making accessible the intellectual output of universities, regardless of format.

Libraries are no longer collections-driven, but use-driven, which requires content to be visible and usable in the digital world. The increasing dependence on digitalization has made this an exciting new era for big data, which facilitates uncovering new connections between collections across different institutions.

With all of these exciting developments in collections, research resources, big data and digital initiatives, librarians and libraries are facing an increasing ethical challenge of patron privacy and confidentiality, one they faced in the 20th century as well. They must now develop comprehensive data confidentiality policies, unlike Netflix and Amazon, which share personal information to make money.

The shift in supporting the creation of research tools for libraries also requires a transformation and focus on pedagogical tools. Patrons look to libraries to assist them and provide tools for skill building.

At Princeton, for example, architectural students now have access to the Architecture and Engineering Materials Collection, which provides them with basic materials used in design and construction. In addition, library staff members have undertaken surveys to understand user experience in its libraries to discover opportunities for innovation. Given that almost every American undergraduate owns a smartphone, tablet or laptop, virtual accessibility is found everywhere on campus. Applications at Cambridge were developed by library staff to assist faculty and students to find the specific kind of environment they needed -- quiet study space, noisy café to work, etc.

Also at Cambridge, a new research project, Protolib, provided strategic information into how Cambridge students and researchers felt about library spaces. The themes and trends that emerged from those evidence-based findings served as the basis for planning and designing new and existing library spaces. Ms. Jarvis’s experience at Cambridge has served her well as she works on the final phase of the 10-year renovation of Firestone Library.

Academic libraries for many years were known for the depth and breadth of their printed collections. The 21st century research life cycle and student experiences are now reflected in the mandate for academic libraries to fulfill an ever-widening range of activities in support of researchers -- faculty and students alike. They must rise to the challenges of the possibilities of new technologies while preserving the materials of the past, the proliferation of data and the production of knowledge in digital form. They must also remain flexible enough to anticipate and meet future needs for information, knowledge and analysis, regardless of format.