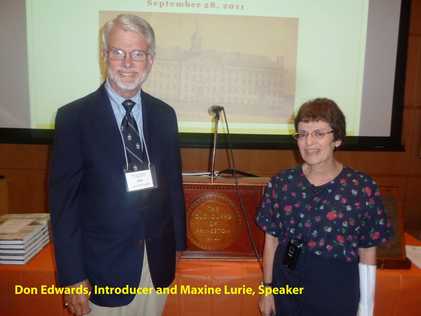 Minutes of the Third Meeting of the 70th Year
ur president, Robert Varian, called the third meeting of the 70th year to order at exactly 10:15 o'clock and Don Evans led us in singing the invocation.Larry Pervin read the minutes of last weeks meeting to our assembled members. Don Edwards gave an eloquent introduction of our guest speaker, Maxine Lurie, retired professor of history at Seton Hall University.

​Dr. Lurie gave an interesting, informative and multislide presentation on the beautiful book she co-edited “Mapping  New Jersey”. It was obviously a significant undertaking, a labor of love that took years to complete after a great deal of research.

The book contains many maps, illustrations and statistics and is divided into six chapters: 1. The Environment  2. Land Use 3. Demographics 4. Transportation 5.Economy and 6. History and Politics

Maxine presented a great deal of  interesting and often unrealized information about New Jersey including:

As Maxine concluded ,the ten copies of her book “Mapping New Jersey” sold out immediately.