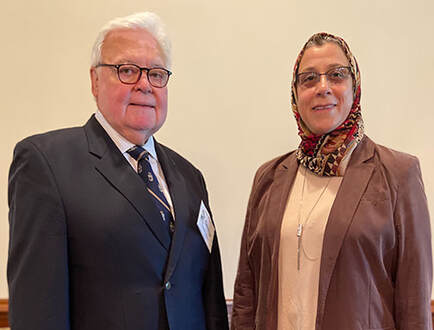 George Bustin introduced our speaker, Amaney Jamal.  George substituted for Ruth Miller who was unable to attend the meeting.  Dr. Jamal is the Dean of the Princeton University School of Public and International Affairs.  She earned her bachelor’s degree from UCLA followed by a PhD from the University of Michigan.  She has been on the Princeton faculty for over 20 years, serving in several leadership roles and has received many awards and prizes including being cited as a Carnegie Scholar. Among her many books and articles, she won the 2008 American Political Science Association Best Book Award.

Dr. Jamal opened her talk by introducing the audience to the Arab Barometer, which is the most comprehensive, authoritative, and scientifically rigorous source of information about the people living in the Arab world.  People have tended to believe that all Arabs are all are the same, forming a monolithic entity.  Academics and policy makers both suffered from a lack of hard data on which to base positions vis-à-vis the various Arab countries or to substantiate policy development.   In 2006, the Barometer, with a small budget, was able to survey six countries.  Today, with a more substantial budget, wave seven of the survey across 13 countries has been completed.

During the Arab Spring many demonstrations in Arab countries generated hope that some might move from authoritarian governments to more democratic governments. Two successful cases were Egypt and Tunisia. The Egyptian case lasted for less than a year before falling back to an authoritarian regime.  Tunisia was the poster child story of moving from autocracy to democracy. It has since reverted to an autocracy.

Dr. Jamal displayed several graphs based on the findings of the Arab Barometer. The economy is of prime importance among Middle Eastern and North African citizens but show differences by age groups in Jordan, Egypt, and Morocco. Unemployment is high throughout the area and very high among the youth.  A consequence of the poor economies is a substantial emigration, particularly among educated Arabs, causing a brain drain. Seventy percent of those holding a PhD have left their countries.  People younger than 30 more likely want to emigrate to other countries than older people.  Interestingly, majorities of both young and old people support gender egalitarianism.  All groups show a lack of faith in their governments particularly the youth who feel powerless in improving their lives.

Since the Arab Spring, surveys show a decline in the belief that democracy will provide an improved economy.  Only about a third of the population across the Middle East/North Africa (MENA) countries think that democracy will be good for the economy. Tunisia represents an interesting case.  At the beginning of the Arab Spring, 20 percent of the population thought democracy would weaken the economy. A decade later the number had risen to 43 percent because unemployment had increased dramatically during the democratic interim.

Social scientists define a democracy as a country that has had two consecutive free and fair elections and a peaceful transfer of power.  That happened in Tunisia; it was a democracy until the most recent election.  Democracies require an informed and engaged population.  Currently the populations of these countries get their information through social media, with no assurance that the information is accurate.

The favorable view of the U.S. is gradually declining, although there was some uptick after Biden’s election. Generally, there is more interest in economic links with China than with any other country. There is little support for the Abrahamic Accords.

During the Q and A, there were questions about the methodology of the Arab Barometer. The group partners with local institutions and follows accepted procedures to select the samples and conduct face-to-face interviews. To protect the people who participate in the surveys, their identity is rigorously protected.

For more information about the Arab Barometer, go to https://www.arabbarometer.org.