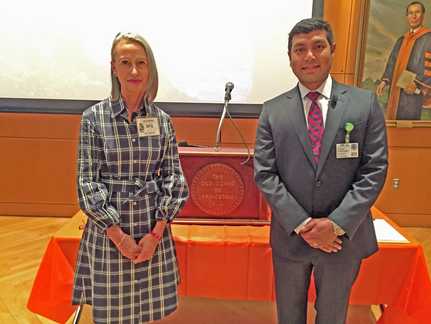 BF Graham, Introducer Dinesh Dhanaraj, Speaker
Minutes of the Third Meeting of the 74th Year
The Old Guard of Princeton’s third meeting of its 74th year was called to order by President Owen Leach at 10:15 A.M. There were    attendees. Julie Denny led the invocation. The minutes of the September 23rd meeting were read by Mary Reath.

BF Graham introduced Dr. Dinesh Dhanaraj, M.D. , Attending Orthopedic Surgeon at the University Medical Center of Princeton at Plainsboro.  Dr. Dhanaraj specializes in shoulder, hip, knee and ankle arthroscopy and fracture care.  He obtained his medical degree (M. D.) in 2004 at the University of Texas Health Science Center in San Antonio.  His Orthopedic residency was at the NYU Hospital for Joint Diseases and a subsequent fellowship in orthopedics and sports medicine at the University of Pennsylvania Hospital System.

Dr. Dhanaraj began by paying homage to Galen and Vesalius, two of the most influential founders of modern human anatomy.  He stated that the Hippocratic method of relocating a dislocated shoulder is still in use.

There was a brief description of joint anatomy with emphasis on hyalin cartilage which strongly influences the movement and durability of a joint. Hyalin cartilage looks like the “shining end of a chicken bone”.  Hyalin cartilage unfortunately does not regenerate.

Joint preservation, when possible, is the “holy grail”.  Dr. Dhanaraj described some of the mechanisms operative in joint damage including trauma, various types or arthritis, congenital disease and infection.  He showed a slow-motion video of a soccer related knee-cap dislocation as it was happening during play.  The video was accompanied by many ooh’s and ugh’s of pain shared by the audience.  We were all relieved when the knee-cap was successfully relocated.

There is no cure for the joint diffusely involved with osteoarthritis.  Joint replacement may be necessary.

Surgical considerations relate to alignment, ligamentous stability, and cushioning of the joint which will be impaired in the case of knee injuries involving the meniscus.

Dr. Dhanaraj stated that tissue transplantation techniques can be used to fill a pothole but can’t pave the entire road.  Various types of cartilage transplantation were described, including plugs, cells or preshaped matrix products.  Tissue implanted may be from the patient or a human donor.

The meniscus is the most commonly torn structure in the body.  Dr. Dhanaraj described stem cell injection and various meniscus replacement techniques which are not yet widely practiced in the US.

Hip arthroscopy can be used to shave out bony impingements.

Prevention in the form of warm up exercises and stretching in particular is important.  Hippocrates stated that walking is man’s best medicine.

Finally, a few highlights from the Q and A period:

Q:  I don’t have any cartilage in my right knee joint.  Should I be concerned?
A:  We don’t treat an x-ray; we treat a patient.  We intervene when a patient’s symptoms interfere with their life style.

Q:  What about chondroitin sulfate or castor oil?
A:  If it works for you, take it.

Q:  Should we eliminate collision sports such as football?
A:  I would not let my kids play football.