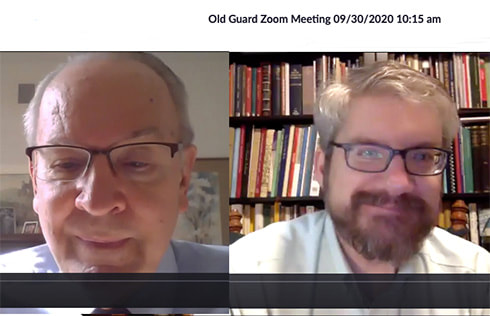 The following Regular Members are changed to Emeritus status:

Following the election, President Schreiber expressed his thanks to those who responded to his email regarding the use of a closed caption system, a technology being investigated for use at Zoom meetings by the Executive Committee.  He also gave special thanks to Sandra Shapiro and Greg Dobbs for their extraordinary work in organizing and implementing the technical work required to make these meetings happen and invited volunteers to help this effort.

Rob Fraser then introduced the speaker Eric White, Curator of Rare Books at Firestone Library since 2015 and author of a recent book Editio Princeps: A History of the Gutenberg Bible (2017). Dr. White has a BA from the University of Pennsylvania and an MA and Ph.D. from Boston University, all in art history; additionally, he has an MA in Library Science from the University of North Texas. Rob asked us what an incunable was (a book printed in Europe before 1500) and noted that the most famous of these is the Gutenberg Bible printed in 1455 in Mainz, Germany.  Today’s speaker spent over seven years tracking down the original 49 surviving Bibles and 14 fragments that have survived through the centuries.

Dr. White began the story of the Gutenberg Bible and how one writes the biography of a book; he shared illustrations throughout. His story actually began in the late 1990s at the Bridwell Theology Library at Southern Methodist University, which owned 31 leaves of a Gutenberg from the Book of Jeremiah. White used these in a course teaching how machine printing began and to show how these books were used and added to by owners, teachers, and librarians. Bridwell also owned an additional leaf, called the Noble Fragment, and there were more fragments at other libraries. These came from original volumes torn apart over the years and used as “binding waste” for linings and covers on other books; some Gutenbergs were torn apart and sold as individual leaves. A Dallas donor, Elizabeth Perkins Protheroe, also had a collection she donated to the Bridwell. This collection contained a leaf from Genesis printed on vellum, a more expensive kind of material. Thus, three different kinds of materials existed in this library. How had they gotten to Dallas, Texas? So the story began…

While the Gutenberg Bibles had enjoyed some 50 to 60 years of fame in the fifteenth century, that was followed by a long period of forgetfulness; Luther and others used bibles in German; many Gutenbergs were destroyed during the Reformation and in the following two centuries. About 49 survived until they became a subject of serious interest, gained value as collectors and libraries acquired fragments, and scholars began using evidence from the books themselves to teach and to establish their provenance.

By the beginning of the digital age in the 1990s, there were whole volumes and a number of fragments in places like the St. Louis Art Museum, the Bridwell Library in Dallas, the British Museum, Princeton University, and the University of Texas at Austin Library, which had an entire Bible purchased in 1978. These books were usually treated as icons to be seen, but White began to question how they differed from one another, where they had been over the centuries, and in what ways they were similar. The vellum leaf in Dallas was revealed to be the other half of a leaf in St. Louis. The Austin Bible had markings similar to a Vatican holding; German and Dutch Bibles had brandings in the cover leather similar to that used in the southern Low Countries around Hertogenbosch where the Texas Bible had come from. A book at the Carthusian monastery in Santo Domingo de Silos in Spain was also similar. Since German and Spanish scholars didn’t communicate, these works existed in many places without being known or compared.

So the questions for White, given all these books and fragments, became, what is a Gutenberg Bible and how to tell the story of its three eras of invention, forgetfulness, and rediscovery. About 180 Bibles had been printed in 1455. Individual pages of the original books were all printed on the same day and then assembled into a whole book. White decided to use the structure of Vasari’s The Lives of the Artists and tell the story in the order of their rediscovery in each century from the 18th through the 20th.

He begins with the earliest discoveries in the 18th century when there were 11 known surviving elements. Searching fragments out on the Internet required White to use search terms in many languages, using many different phrases. By using these modern research tools, however, White found there were 26 known at this time; this discovery has reshaped knowledge about the Gutenbergs. Forty-nine are now known to have survived after two or three centuries of forgetfulness.

The first known mention of the book is found in the Cologne Chronicle in 1499, which talks of Gutenberg inventing printing in the 1450s in Mainz and describes the book as having pages of 42 lines of Gothic lettering like that in Latin Missals. One Bible in Paris has a signed note dated August 23, 1456, made by the librarian in Paris, having finished his work of coloring and other additions. A Berlin copy has an inscription from 1700. This predates the French-owned Mazarine Bible which was thought to be earlier. The Swiss librarian Samuel Engel described in detail a Gutenberg he saw in the Carthusian monastery in Mainz in 1744. Another librarian, Andreas Straus, described in great detail one he saw at Regensberg. Several copies were brought out by Alexander Horn, a monk at the Scots Monastery near Regensberg, who was also a spy for England. Horn wrote many letters to Earl Spencer, ancestor of the late Princess Diana, saying he had found more Gutenbergs, which he then brought to England. Earl Spencer’s Bible is now at Manchester, and three others are at Eton College, the Morgan Library, and the Huntington Library. In 2009, a vellum leaf was found in the library of the French city of Colmar. Several more leaves have been found in the Dresden and Leiden areas.
The Princeton Bible was discovered in 1838 at the Dominican monastery library in Erfort, Germany. In 1870 it was brought to England, then to New York and Chicago. It was bought by John T. Scheide in 1923. Bill Scheide ‘36, his son, had the first 15 Bibles printed in Europe in his collection. He donated these to Princeton on his death. The Princeton Bible has an especially beautiful original binding from the 15th century. The latest discovery, made in 2016, was a leaf used as a cover for another book in 1666. This was purchased by the Princeton University Library at auction and will be used in teaching this year. Other leaves exist in Germany.

White then noted several other important people instrumental in developing the history of the Book: German poet and librarian Wilhelm Johann Jakob Heinse, Berlin librarian Paul Schwenke, Princeton’s Paul Needham, and teacher Friederich-Karl Baas, who discovered a Gutenberg in an attic in Germany. He also included a photo of Shirley O’Hara, then a student at UCLA, who was shown with a Noble fragment the university had recently acquired. She later became a successful actress in film, radio, and TV.

Editio Princeps was awarded a prize in 2017 for the best book on Book History.

Questions from the audience were presented by President Schreiber and answered by Dr. White.

What was the process of printing? White explained that print type was set up in 42 lines and about 200 copies of the same page were made. The next day those pages were turned over and the next page was printed. Paper was used first and the more expensive vellum (calf hide) was used in smaller quantities, about 140 paper to 40 vellum. When all the pages had been printed, they were then assembled into individual books and shipped out. Decorations, colorings, and notes were added later by others at their various destinations.

How many pages were in a volume?  Enea Piccolomini, later Pope Pius II, writing about the Gutenbergs being sold in the 15th century, estimated there were initially about 158 copies. Some we know were sent to the Emperor in Vienna, where Piccolomini saw them in 1455.

How do scholars determine that some leaves are from the same book? Individual evidence like handwriting in notes, decorations, the strokes of capital letters were done by people at the destinations and are distinctive.

What was the type like? Each individual letter was built and shaped on metal and inserted into the line.
What is a Gutenberg Bible worth? Bill Gates wants one, but there are none currently available. Value depends on condition, but the price would probably start around $50 million.

Professor White invited anyone with more questions to contact him at ericwhite@princeton.edu.