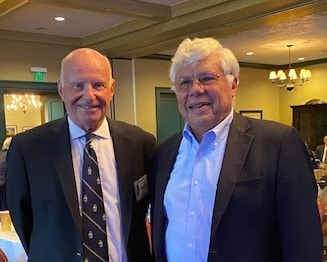 Henry Von Kohorn, Introducer, and Robert Durkee
​Minutes of the First Meeting of the 81st Year
The meeting was called to order at Springdale Golf Club by President John Cotton on September 7, 2022, at 10:15 AM, and was followed by the traditionally sung convocation, led by David Long. Minutes from the May 8, 2022 meeting were read by Lee Gladden. President Cotton thanked the Old Guard committee who held forth during the virtual meetings of the long pandemic lockdown, and thanked the members of Program and AV committees for their work during that time and in preparing the current programs. He introduced badge master Larry Hans for those in need of new badges.

Guests were then introduced: Hella McVay, introduced by her husband Scott McVay, and Anne Katz introduced by a member. A memorial silence was observed for five members who have recently died: Jotham (Jo) Johnson, Robert Hopkins, Diana Crane, David McAlpin, and Elwood (Woody) Phares.  There were 90 members in attendance.

Henry von Kohorn, noting that this was our first in-person meeting in 30 months, introduced Robert Durkee, the vice president and secretary emeritus of Princeton University, who recently completed a new edition of The Princeton Companion. Bob, a 1969 graduate of Princeton University, in 1972, became assistant to the Princeton president and took on additional responsibilities in 1978 as Vice President and, in 2004, as Secretary of the University.  Bob has been called the “Culture Carrier” of Princeton; thus, he was a natural to have taken on the task of revising the first Princeton Companion by Alexander Leitch, published in 1978, in which Bob had actually written an entry.

Bob showed physical copies of the original Companion with its black cover and the new edition in white with orange and black print. Then he enumerated the many new elements of the current 584-page edition, which has 362,000 words. All 404 original entries have been updated and 115 new entries have been added. Three new essays on the history, the growth, and the significance of the Princeton motto are included as well as a new calendar with an historical Princeton event from over the years for each day of the year. For example: September 5, 1965, women enrolled in Princeton for the first time; today, September 7, in 1898, the Princeton chapter of Phi Beta Kappa was chartered.

Other new entries reference members of the cabinet, college officers, deans and vice presidents, names of funders, new departments and programs, and other useful details. Lists in the book’s back section include baccalaureate speakers since 1973, honorary degrees since 1970, prize recipients and other data. Also included are histories of African American, Latin American, and Asian students at Princeton, as well as faculty, students, and alumni who have helped shape Princeton’s evolution over the last fifty years. Entries on residential colleges and freshman seminars had not even been imagined in the first edition. Other new entries include items on Princeton in space, in the movies, on television, the Dinky, sustainability, and the “unanticipated” epidemics.

Bob noted that he deliberately included the history of both the University and the town itself from its settlement in 1683 by Europeans who joined the original resident Lenni Lenape. The Lenape trail from the Delaware River to the Raritan River became the King’s Highway and what is now Nassau Street. Maps show the original campus with its two original buildings. Belcher Hall, which was to have honored an early patron and benefactor, was, at his shrewdly political instigation, finally named Nassau Hall in honor of the reigning British Royal Family. There are maps showing the four different locations of Joseph Henry House, named for one of Princeton’s premier early physicists. The house, built in the early 19th century, was moved first in 1879, then was supplanted by the Chapel and later again by Firestone Library. The house moved in 1946 to its current location.

The campus expansion is also chronicled from its original 35 acres in the 1800s, when it stretched from Nassau Street to the current location of Prospect House. The acquisition of the 185-acre Potter Farm, owned by John Cleve Green, an important benefactor, extended the campus to Stony Brook, which eventually became Lake Carnegie, after Gray Farm was bought in 1905. In 1904 the purchase of Springdale, Olden, and Gray Farms dramatically increased the campus size. Two more farms were given by alumni owners in 1922, and the university acquired an additional two, thereby extending the campus to over 400 acres from Harrison Street to Alexander Road and eventually to Route 1. In 1951, when the university bought 825 acres on the east side of Route 1 known as the Forrestal Campus, the New York Times called it “the second Louisiana Purchase.” Growth continues according to the Campus Plan shown on a final map. Two new residential colleges are almost completed; the buildings of the new Engineering and Environmental Studies program are in progress. There is also a map showing development of the Lake Campus slated for completion in 2026.

While the first half of the 19th century was a low point in the university’s history, some transformative events did take place. The Companion provides four particular events that significantly effected Princeton’s future growth: 1) significant faculty appointments in the sciences; 2) greater involvement of alumni and the founding of the Alumni Association in 1826; 3) an increasing number of students from the South; and 4) the banning of fraternities and the requirement to make eating arrangements off campus, which led to the creation of the eating clubs. The first club, Ivy, was located in the building that had originally been the short-lived  Law School which lasted only eight years and graduated seven students.

The New Companion also makes some corrections to the original book, e.g., the number of Princeton alumni (86) who died in the Civil War. Princeton was then a divided campus; 39 died for the North and 47, for the South. A significant addition is the importance of women donors in the early 20th century, who donated handsomely to pay for Dod, Brown, Alexander, and Holder Halls, as well as the Graduate College. Anecdotes abound about famous alumni, such as Robert Goheen, John F. Kennedy, the Sarbanes family, and Bill Bradley.

Other notable developments include the Movement for a New Congress which encouraged student participation in Congressional campaigns. At least 20 Pyne Prize winners became Trustees. Three Princetonians serve as Justices on the current Supreme Court. New South was named to contrast with Old North (Nassau Hall).
Chien-Shung Wu, the first female faculty member in the Physics Department, is also the first Princetonian on a U.S. stamp. Y. Ping Sun, the first Chinese student to come to Princeton after the Cultural Revolution in 1981, almost didn’t come because she couldn’t swim, a requirement no longer enforced. In 1933, Willa Cather was the first woman to receive a Princeton honorary degree, and in 2018, Frances Arnold ’79, was the first Princeton alumna to win a Nobel Prize.  Queen Noor of Jordan (Lisa Halaby ‘79) was the first alumna to be baccalaureate speaker; Michelle Obama, the first Princeton woman to be First Lady of the United States.

Also included are many other Princeton firsts: the first woman to win the Pyne Prize, the first woman valedictorian, the first women faculty. Other items include the first Black faculty and administrators, Sir Arthur Lewis, Charles Davis and Carl Fields, Olympic Gold medalists, the shortest (3 pages) and longest (756 pages) senior theses. Princeton’s connection to the Monuments Men who saved precious art works during and after World War 2 is remembered through the reference to Ernest DeWald, who was later Princeton University Art Museum Director. In a  movie connection, the 1973 Academy Award was given for the documentary film Princeton: A Search For Answers. A useful entry concerns the ongoing controversy around using the name of Woodrow Wilson, a discussion which goes back to the 1935, when the Trustees voted to name the School of Public and International Affairs for Wilson but didn’t announce it until 1948. The name was removed in 2020. Many more firsts are available in the New Companion for those loving all things Tiger!

Questions following the talk asked about