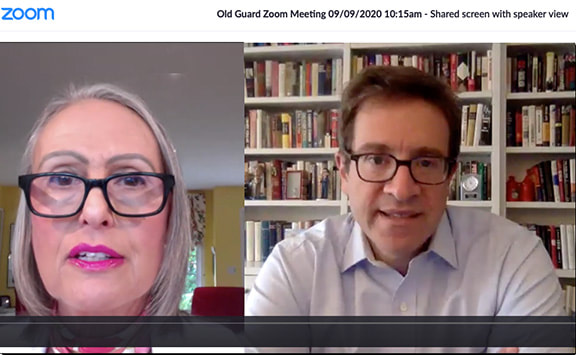 BF Graham, Introducer, and Julian Zelizer
Minutes of the First Meeting of the 79th Year
President Schreiber called the meeting to order at 10:15 am. The meeting was held on Zoom due to the closure of the Princeton University buildings. Minutes of the May 21, 2020 meeting were read by David Vilkomerson. There were 146 Old Guard members and guests in attendance.

BF Graham introduced the speaker, Julian Zelizer, Professor of History and Public Affairs at Princeton University. Professor Zelizer’s latest book is entitled “Burning Down the House: Newt Gringrich, the Fall of a Speaker and the Rise of the New Republican Party.”

Professor Zelizer began by asking “Where are we today?” and listed polarization, toxicity in Washington, inability of either side to speak with the other, movements to the right and the left in either party and tearing down of institutions.

“Who pushed this?” “What are the turning points?” Zelizer considered Newt Gingrich pushing out the House of Representatives Speaker Jim Wright in 1989 as a major turning point. It showed that Gingrich’s brand of polarization, intractability, and grab for power above all, including governing, worked and was able to deliver power to the side that practiced these methods. Zelizer said the implications of this have been enormous and resonate to this day.

Newt Gingrich is a non ‘60’s kid in the ‘60’s, a smart aleck know-it-all with an uprooted family and childhood, who wanted a Nixon majority to replace the FDR majority. Gingrich is a student of Paul Weyrich’s right wing tactics.

In 1978 Gingrich won a House seat by smearing his opponent’s character, running as an outsider anti corruption candidate with family values. He made a name for himself in the House as a young Joe McCarthy type and attacked everyone, a toxic force who would do anything to win, promoting anti-establishment populism.

The House had to become Republican if the Reagan Revolution was to be enacted. Gingrich positioned himself as a key figure with nasty rhetoric, one-minute speeches on CSPAN made to an empty chamber making specific charges against particular people. He headed the Conservative Opportunity Caucus, which included Trent Lott. CSPAN made Gingrich recognized and he continued to use media to promote confrontation and controversy.

In 1989 Jim Wright, an old school Democrat, was Speaker of the House. Gingrich accused Wright of making money from political speeches and favoring his partners in oil and real estate. Wright resigned from the House, hoping he was the needed victim that would stop “mindless cannibalism.” Of course, his resignation showed that the Gingrich tactics “worked” to gain power by eliminating opponents.

As a reward for showing the way to House members, Gingrich was elected Minority Whip and was on his way to becoming Speaker. He had proved that partisanship is more important than anything in the pursuit of power, and that power was more important than governing. Ruthlessness worked.

Zelizer said we need to understand Trump as a product of the Reagan Revolution, destructive and hurtful to institutions. These tactics of classic anti-establishment populism are not going to change if the Democrats win in November.

As is often the case, Old Guard questions and Zelizer’s answers concerned the present: