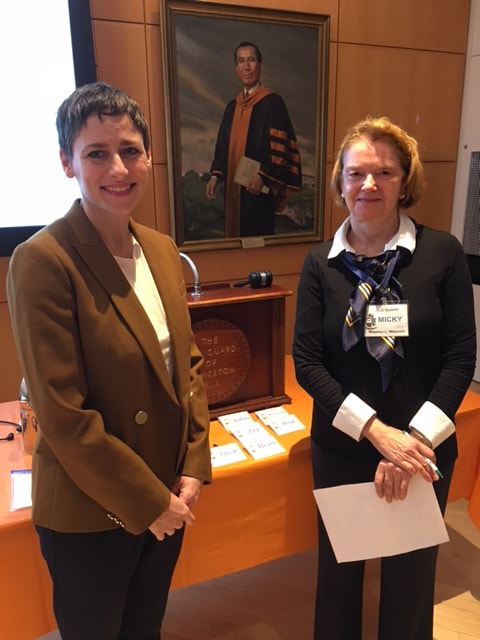 On Dec. 6, 2017, 141 Old Guard members and guests attended the meeting at the Friend Center, which was called to order by the president, Jock McFarlane at 10:15 a.m. Joan Fleming led the invocation and Marge D’Amico read the minutes of the last meeting.

Professor Paluck began her talk by telling us about the historical origins of her field, social psychology, back in the 1940s after World War II.  It was a time, she explained, when we were trying to understand how our institutions had failed us, how our humanity had failed us.  We observed at that time that prejudice and violence are essentially social in nature and not a matter of flawed individuals or beliefs.  Rather, social behavior is about social norms and, more directly, about our perceptions of social norms.

“What does that statement mean?" Professor Paluck asked rhetorically. She answered by presenting an amusing example from the academic world she inhabits.  She then asked how academics -- political scientists, economists and psychologists in particular -- raise issues and make comments when they get together to hear a colleague's lecture.  It appears that they are not always polite, although social psychologists are (social psychologists will even compliment a speaker when they criticize her) and economists, in particular, are not (economists will start asking questions immediately and then not stop).  Those behaviors are the social norms, or rules, of those academic groups in a specific setting.

So how do we know the rules, and who is in charge of meting out social punishment when the rules are violated.

What social psychologists are learning is that people observe the behavior of others in their group in order to decide what is typical or desirable, in other words, in order to form their perceptions of the group’s social norms.  The way we perceive group norms applies to our behavior at an academic lecture and, also, to behavior with respect to prejudice and violence. Essentially, we walk around developing perceptions about the behavior of others and, then, we come together to establish the rules of the group.  Put another way, social norms belong to the group and are “of” the group.

Although the speaker's general observations about group behavior began with her personal experiences with academic speakers, most of her talk described her developing understanding of how our perception of norms can be, and is, influenced by the news media and other sources such as gossip, humor and texting.  Professor Paluck completed her Ph.D. in social psychology at Yale after conducting field work in Rwanda, where she examined whether intergroup prejudices could be reduced through the use of mass media.

After the genocide in 1994, when the Hutu majority government attempted to eliminate the Tutsi population, Professor Paluck, working with others, embedded stories of reconciliation in a popular daytime Rwandan soap opera.   One of the stories had a “Romeo and Juliet” theme that placed the characters in different, antagonistic villages. The hope was that the experiment would change people’s minds about violence but the result was a growing “different” perception of war, a growing recognition of the possibility for new social norms.  The actual positive outcome was that people discussed the issues separating them and, although they were not yet ready to accept a marriage between Romeo and Juliet, they thought that, maybe, their children would be.

Almost as a postscript, Professor Paluck mentioned a more recent Rwanda study that took advantage of the fact that the country’s hilly terrain prevents radio broadcasts from reaching many villages.  The men and women living in those villages, a natural control group, did not develop new social norms but, rather, continued to perceive violence as an “expected” norm and to “fear” not participating in violent behavior.

But there are less-troubling templates for how our perceptions of social norms can be changed.  So, for example, if you tell people at a hotel to use their towels more than once (to conserve water), some of them will pay attention. But, if you tell people that 75 percent of those staying at the hotel use their towels more than once, you will get better results from the new towel users.  Prejudices, said our speaker, work the same way: Tell students at a school that most of their peers accept racial stereotypes and more students will perceive racial stereotypes as a norm and declare that they are O.K.

At this point, Professor Paluck told us about a humorous discussion involving behavioral economists who suggested that we can even change the behavior of asteroids (actually “nudge them off course”) by suggesting that asteroids, as a group, have certain norms that they follow.  All we have to do is "tell asteroids that 99.99 percent of them have bypassed the earth” and they will continue to bypass the earth!

In the real word, however, as our speaker indicated earlier, direct observation of group members plays a role in changing social norms, as does the media, rumor, gossip and texting.  And, she added, institutions (especially respected institutions, for example, court rulings on same-sex marriage), and the behavior of group leaders are sources for how we “know” what is normal.  It turns out that we look to particular people for the information we seek about group norms and that there are some individuals who have a greater influence on the group than others.

In order to study the influence of group leaders, our speaker and researchers working with her, created complex social network maps of 24,000 students from 66 high schools in New Jersey.  The maps pulled out students who were designated as “social referents,” students who were getting a lot of attention from others and students who were leaders of “cliques” (smaller groups).

The researchers observed that most students followed referents who had, as a result, “overweighted influence” on their followers.  The question that the study asked was whether the social referents in half the schools, randomly selected, could be taught (the Roots Program) to reject bullying, and whether there would be a decrease in bullying behavior in groups associated with those referents.  The answer emerged through an examination of school administration conflict reports that revealed measurably fewer conflicts in groups linked with referents who bought into their training and rejected conflict behaviors.  Indeed, the larger the number of referents who accepted the new social norms, the larger the number of students who followed.

The theory that commentary imbedded in television and film can change social norms was again tested by Professor Paluck through a film about corruption in Nigeria called "Water of Gold.”  Although Nigerians had grown weary of corruption in their country and believed that nothing could be done to change the way things were, after the film played in 106 locations around Nigeria people began to take action.  In the film they observed others who resisted the status quo and learned that resistance was possible. After seeing the film they altered their behavior and changed social norms.

Professor Paluck ended her lecture with some further comments on institutional leaders.  Institutions, she said, are viewed as having areas of expertise that can create and adjust social norms.  Soon after the release of Obergefell v. Hodges, in which the United States Supreme Court validated the right of same-sex couples to marry, our perceived norms changed.   Interestingly, personal opinions and individual support for conservative-liberal ideas did not change – what changed was the perception that more Americans support same-sex marriage and that that support would continue to grow in the future.